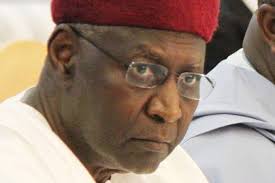 The Chief of Staff to the President, Abba Kyari, has taken a swipe at the European Union, United States and the United Kingdom accusing them of having a secret agenda against Nigeria.

Kyari, in an article published by THISDAY, said while the world powers claim they want free and fair elections, their representatives in Nigeria have a different agenda.

He accused them of opposing Buhari because of his reform agenda which will free the country from import dependency and policies that hurt the Nigerian economy.

Read the full article below:

President Muhammadu Buhari has campaigned in this election exactly as he has governed since 2015, true to the values in which he has believed all his adult life: our security, a diversified economy and an administration free from the scourge of corruption and the sleazy mediocrity it fuels.

Buhari has not changed, and with good reason. Without these attributes, Nigeria will not know peace, prosperity or the rule of law: the only real foundations on which free and fair elections and genuine democracy can thrive. He is stubborn and resolute in defence of these values. This irritates quite a number in the elite, and especially those who, four years ago, thought that they could play the President and use his popularity to continue to steal and cheat the people.

These players have failed. They are angry but they have not yet given up. They have some unlikely allies. Our traditional friends in the US and Europe say they want nothing from Nigeria except free and fair elections. But if you look at what their representatives here actually do rather than what they say, the unmistakeable signs of a quite different agenda are plain to see.

It’s easy to forget where we were, a country falling apart, unable even to protect school girls and where corruption defined every aspect of so much of our public life and private business. Today our media ignore the revelations in a Milan court of how oil companies and fixers stuffed cash in suitcases and the nine-figure bank accounts of former PDP justice ministers and spy chiefs and Presidents.

This failure goes beyond individuals or particular political parties, although it is true that our decline accelerated under the PDP after the end of military rule in 1999, a betrayal that Atiku Abubakar and many of his allies hope forlornly to revive and celebrate.

Our young people see only the devastation that has been visited upon them, too young to remember the vibrant rural economy that once gave us the wealth for the schools and hospitals we are only now beginning to revive.

They cannot imagine the rubber plantations where for decades Dunlop and Michelin made tyres for Nigeria and the world. The factories are long since closed. Our palm oil was once a world leader but it is only now, under this government, that we are reviving an industry on life support.

We have timber, we have hardworking people – and yet we came to be importing even simple school desks and bedframes. We have so much of what we need for fertilisers, yet government after government preferred to let the plants we had already built go to waste for easy commissions on second-rate imports. Textiles used to employ thousands, and will do again, when we allow our talent fairly to compete on the international stage.

A major crude producer with four refineries that once delivered petroleum products for home consumption and export, Nigeria was reduced to importing petroleum products as if we were Burkina Faso or Bangladesh, not a leading member of OPEC. Our golden goose was starved.

The military and the PDP took all the money, they didn’t pay oil partners what we owed and only now, after this government’s efforts, speaking plainly and finding real solutions, can we begin to grow exports that have stagnated for 30 years.

When our private banks collapsed (again) in 2009, the outstanding liabilities were N5.7 trillion. It is hard to imagine a sum of money, so vast, owed by so few, to so many.

The list of decay is long. And yet this was the inherited culture of government – ‘to those that have, give more’ – that we have challenged, a culture where every declared reform was in fact a disguise to privatise profit and leave the rest of us with all the risk.

Nigeria has almost as many problems as we have people. But it also has all the resources to meet our needs, if they are properly managed and honestly marshalled. Think where we would be today, but for all the time wasted, the prosperity we would enjoy and the better partner we might have been to our friends in the region and further afield! Buhari is not a populist but he is popular because he is delivering on our most basic needs first.

Do our foreign friends simply not understand what is at stake, or do they actually want us to fail? We know we are not equal partners, and do not pretend to be so. In our own time in government, the US, the UK and the EU let us know subtly, and often not so subtly, what we should be doing on everything from currency reform to fuel deregulation and the import of toothpicks.

They have their own subsidies to protect key strategic interests, their farmers and steel plants, but condemn our own efforts to protect the poorest and most vulnerable from an unregulated market for food, transport and housing, or to create and protect space for new opportunities and innovation to flourish. This is not so much a question of policy, but integrity: we, at least, mean what we say. So many past governments in Nigeria did not.

Our transition has been difficult because Nigeria needs radical change, which we have been delivering, despite ingenious and often disingenuous resistance from vested interests and the business-as-usual brigade. Which begs the question: is there a difference between what suits Nigeria’s real national interest and what suits the interests of the Great Powers?

The years of failure were characterised by hypocrisy and betrayal by our leaders, who were in turn easy targets for manipulation – much easier for foreign powers to manage than a government genuinely looking to repair and revive today so that we can build tomorrow. And tomorrow never dies.

I always knew that business-as-usual had a powerful self-interest in resisting CHANGE. I had hoped their tentacles did not stretch so far or so easily beyond our borders, that a good case, well made, would receive a fair hearing.

In three and a half years in government, I have learned that decent argument and hard facts face stiff competition from vested interests that seem so easily to sway people who should know better. A convenient lie is not better than an uncomfortable truth.

Nowhere is this clearer than the contrived debate on the conduct of elections. Buhari’s commitment to the democratic process is a matter of record, time and again. All of the work to rebuild our public institutions, restore our values and recalibrate our future prospects can succeed only in a democracy in which the integrity of elections is sacrosanct.

Instead of judging Nigeria by our actions, it seems altogether too easy for foreign partners to be swayed by the expensive words of lobbyists. Riva Levinson has been hired by Bukola Saraki. She was trained by Paul Manafort and Roger Stone (both caught up in the probe into interference by foreign powers in the US elections in 2016) and guide earlier in her career to dictators like Siad Barre, unprincipled warlords like Jonas Savimbi, or frauds like Iraqi exile Ahmed Chalabi, the man who neo-conned the Bush White House.

We are meant to believe that Ms Levinson, like the others who are paid by one of the contestants, wants only to promote a free and fair race. And that it is only a coincidence that this language for hire is identical to what we hear from accredited diplomats!

By omission or commission, it appears it may actually suit our friends, deep down, below the pious words, to see Nigeria a basket case, begging bowl in hand, than the partner we could, should and will prove to be. And we have been here before. At the end of 1984, British diplomats predicted a coup against the then Buhari government, with whom London was quarrelling over everything from apartheid to economic policy (as we knew then, and as it turned out, Buhari was right).

Glowing profiles of Ibrahim Babangida were prepared and telegrams ofcongratulations were drafted. Mrs Thatcher put the project on ice, at least for a few months, but it was not long before foreign powers concluded that their best interests would be served by people who told them everything they wanted to hear on democratisation and reform, but, as they could and should have known, meant precisely none of it.

Nigeria lived through the consequences of this systemic deception. We lost so much in the 30 years after 1985, but nothing as precious as the loss of confidence in our values and what we as a nation could be.

In the 19th century, Lord Palmerston, Britain’s Prime Minister and one of the country’s most celebrated diplomats, observed that “nations have no permanent friends or allies, they only have permanent interests.”

We have been delivering on a programme to restore the rule of law, to build democracy and strengthen security, to deal with corruption and to create opportunity in a new meritocracy. It is a platform that helps tackle violent extremism, illegal migration, trafficking and financial crime. These are the very issues that are central to the interests of our foreign friends, and we are producing results.

Nigeria will make its choice on Saturday. It has never before had a government that has more clearly demonstrated through words and actions its commitment to transparency and the rule of law, protecting good judges and decent public office-holders from the corruption of their peers.

Voters are free to move forwards to a better future or back to the desperate past from which we are now beginning to emerge. Our election commission is independent and has all resources it needs to do its job. We should all be wise to the risks, including partial and premature announcements of unofficial results from unverifiable sources, especially when one party has already declared well in advance that it cannot lose unless there is rigging.

There should be no interference from any quarter, including foreign powers who say one thing but do another – exactly the formula that their friends here have employed for years to bring us so close to despair.