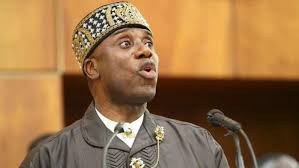 The All Progressives Congress in Rivers State has adopted the governorship candidate of the African Action Congress (AAC), Awara Biokpomabo, for the March 9th governorship election in the state.

The State Publicity Secretary of the APC, Chris Finebone, confirmed this in a voice message made available to our The Punch in Port Harcourt on Wednesday.

Biokpomabo is from the ancient kingdom of Kula in Akuku Toru Local Government Area of Rivers State.

Recall that the APC in Rivers State will not field any candidate in the governorship election following a Federal High Court judgement that ordered the Independent National Electoral Commission to remove the party from the ballot.

It was gathered that the decision to back the AAC governorship candidate was taken after a meeting led by the leader of the APC in the state, Rotimi Amaechi.