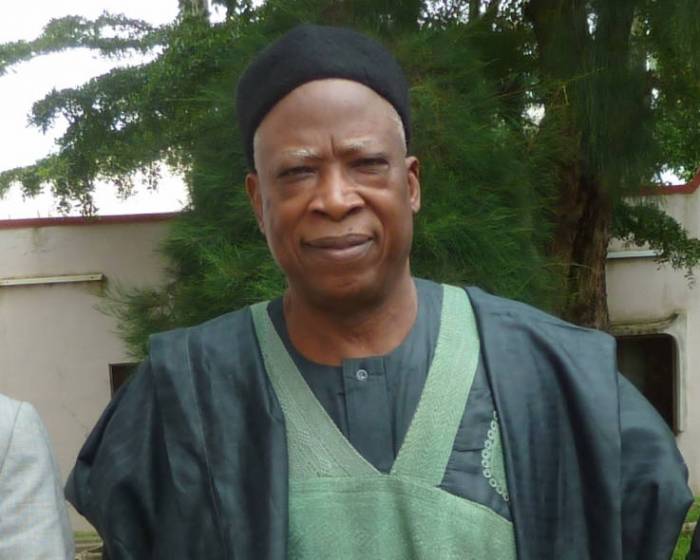 Senator Abdullahi Adamu, former governor of Nasarawa State in this interview speaks on topical National issues including restructuring, state police among others

Do we actually need restructuring in this country?

What exactly do you want to restructure? You cannot just wake up and make restructuring an issue and treat it as if you have the authority to say, let this be done and it is done. This is an issue that affects you, affects me, affects some other persons and each of us has a right to see Nigeria in his own way, to accept or not to accept the current situation that we have.

People behave as if their word, their concern is enough to change the fortunes of this country. Sometimes they get very arrogant to the extent that I think the first point of call for restructuring is to restructure their minds. This is because if they mean well and if they are as educated and as enlightened as they want us to believe they are, there is constitutional provision as to how to go about this fundamental issue.

As I talk to you there has always been a standing committee on the review of the Nigerian constitution. Every national assembly recognises this and tries to make some effort in that regard.

One of the past leaders of this country, a former president of this country, said the exercise by the national assembly is useless, is waste of time, waste of funds and everything, he was reported to have said so, that is Gen Olusegun Obasanjo, he has not denied that statement.

He has nothing to suggest that he is better placed to understand Nigeria’s problem than all of us put together, 108 senators and 360 members of the House of Representatives, that our collective wisdom, he alone supersedes that he will dismiss with a wave of the hand the effort that we are making.

People are actually saying that restructuring should focus on making state governors to become more creative in terms of revenue generation rather than just coming to Abuja every month to share money…?

If that is what they want to review, let them come up with the proposal on how they want the review done so that we can take a look at it as Nigerians, as members of the national assembly, the institution that is given the constitutional authority to legislate over state matters for the good governance of the Federal Republic of Nigeria.

But why is nobody looking at the 2014 National Conference report?

I have respect for President Goodluck Jonathan, if for nothing else, when his party was defeated at the presidential election, he is the first Nigerian in a democratic dispensation, even before the final result of the election was announced, he called to concede defeat. I had the rare privilege of being with President Muhammadu Buhari the very day, the very time, in his campaign office that the call from Jonathan came. I bear testimony that Jonathan did call and I respect him for that. If there is any contrary view on his integrity, that singular act has repositioned him in my mind.

On the issue of the 2014 conference that was held when he was in office, I don’t know why he did not take one single step to get it implemented. Those of you who are talking of 2014 conference, why didn’t you impress it on Jonathan who was instrumental to it, whose administration propagated and set up that conference, it was attended by well-meaning Nigerians, respected Nigerians, I don’t have a doubt about that, why did he leave the report on the shelves to gather dust?

His objective is most or better appreciated by himself and he had all the authority you can imagine to bring the report to the national assembly or whatever he thought was the best way to get it implemented, he had all the options. From the day the report was submitted up to the day that government changed hands, over a year, there was nothing, there was no talk about the implementation of the conference report until when Buhari came into office and when people, wanting to undermine the government of President Buhari and divert his attention, they started talking about implementing 2014 conference report. Buhari did not participate in the conference, nobody has sat down with Buhari and said, this is the report and this is the implication, I want you to implement it.

Buhari came with his own agenda as president, he had his own manifesto and that report was not part of his manifesto. Why are people doing all these side talks?

Do we have true federalism in Nigeria?

It depends on who you are talking to, what interest you have. I don’t know any country where you have true federalism the way we talk about it here. We have three tiers of government recognised by the constitution, the federal, state and local governments. The constitution is very clear as to what is in the exclusive legislative list, that means what is within the preserve, absolute preserve of the federal government, things like defence, currency, immigration, foreign affairs among others. Which of these do you want the state to control and what would be the implication of transferring such function from federal to state government, what are the benefits that would accrue if such review takes place and that authority is shared or transferred completely to the state or local government?

These are issues that you can throw and have it debated at the national assembly. Even Greece where democracy started or America which now boasts as the most catholic of all democratic states, tell me which of these belong to the states except if you take away police, which is why people are advocating for state police?

People just talk in vacuum and they avoid seeking solution at the right place. You are sick, instead of going to the medical doctor with the relevant qualification for you ailment, you just go to the market and start shouting I am sick, I am sick and if I see a doctor, it would be cured, if I go to a clinic it would be so so so. Go to the clinic, go see the doctor who would take care of your problem. In the same way, if you want anything restructuring, anything to change from the current constitutional order, you know where to go. You don’t start calling the president from whatever corner of the country you come from, it doesn’t address the problem.

On the state police, is it the right thing to do now, given the level of insecurity in the country and again due to the fact that a lot of money come from the state to fund the police?

I was a governor for eight years, so I know very well what you are talking about. But you see, you don’t use a bad example to try to float a good and patriotic cause in terms of national dispensations. The fact of the matter is, yes the Nigerian Police like any other institution has got its own ups and downs. I would be dishonest not to admit that. And that’s in the nature of every human organisation, I don’t know any institution of government that you take in Nigeria or any country for that matter, that if you take a good look at its performance, that you will not fault it in one form or another, you can only say that some cases are worse than other cares, there is none that is perfect and Nigeria Police is not an exception.

Why is the police seen or being adjudged to be failing? Why is it that this is now becoming the centre of attraction? It has become so bad that the impression of its failure is causing unrest among our youths, we recently had this ENDSARs protest. Sometimes all these problem we have is giving a dog a bad name just to hang it, that is what has happened to the Nigerian Police.

As I talk to you, I support the Police. I am not doing so in vacuum, I can prove to you with documentary evidence, as a Senator, people come to me in my constituency when they are threatened with security problems, when they are threatened with kidnapping or banditry. They come in writing, asking us to link their desire to the office of the inspector general of the police or state commissioner of police to get members of the SARS wing of the Nigeria police posted to their place. We have made requests and there was concession to our report and these members of SARS went and quelled the restlessness of our people. So I cannot be justified to say everything SARS is bad, I will never say so, because I have seen their usefulness in my constituency and if people are to be honest, in other constituencies, the same thing could be said of their performance.

Yes like I said earlier, there may be a few bad eggs among them, but to generalise and paint all of them in bad light is what I say no to.

See what happened in the US, where the police take hold of somebody who has done nothing, just on suspicion, strangle him to death, you have seen members of the white supremacy kill in a number of places, you have seen the protests in America, they are not calling that the police be abolished, but that government should reduce the funding of the police, American government say no, they wouldn’t do that, that the police is the least appreciated of all the services. That government is supposed to be the embodiment of democratic values in the whole world today.

I am not standing for the police to say they don’t do wrong, don’t get me wrong on that. I know there must have been some bad cases here and there, but you don’t because one or two bad cases, you destroy a whole system.

The police is the most visible of all the services, they maintain law and order, now when you give all of them bad name just because some people want to justify the creation of state police, I can assure you that with state police, it would be worse. I was a governor, if you take Nasarawa State for example, and you have a police chief belonging to one particular ethnic group within the state, it is trouble.

If you have state police and the governor’s interest is infringed upon or is threatened for infringement, God save you. People don’t think of all these things. I wore the shoe and I know where it pinches and I know where the danger is.

The fact of the matter today is that, most of the people joining the police, you cannot vouch for their integrity. In the days of old, you don’t go into Police, Army, Air force or Navy until your character is determined through the process of selection. You community leaders were made to identify you and attest to the fact that you are of good character, it is not so now and when they engage them, give them uniform and gun, they send them to places where they know little to nothing about, communities they don’t know their culture, their language, their traditions.

The chances are I would be there when it comes to the national assembly, God permits, so I would want to prejudice my role when the time comes.