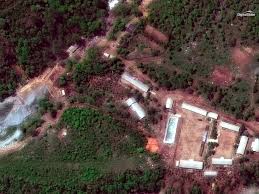 North Korea on Thursday followed through on a pledge to blow up tunnels at its nuclear test site at Punggye-ri, in the full glare of a section of world media, amidst doubts about  the summit with United States.

North Korea had conducted all six of its nuclear tests at the  site, which consists of tunnels dug beneath Mount Mantap in the northeast of the country.

A small group of international media selected by North Korea was on hand to witness the demolition, which Pyongyang says is proof of its commitment to end nuclear testing.

The destruction of the site began at about 11 a.m. with the blowing up and collapsing of a tunnel and an observation post.

South Korean media described how North Korean authorities called out to media to ask if they were ready to film the first blast. They then counted down.

“With a heavy boom that shook Mount Mantap, dirt and broken rocks spilled out from the entrance,” South Korean media reported.

After some time, another tunnel and other facilities were destroyed, then a third tunnel and another observation post. About five hours after the operation began, two military barracks were demolished, South Korean media said.

The North Korean offer to scrap the test site has been seen as a major concession in months of easing tension between it, on the one hand, and South Korea and the United States on the other.

North Korea announced in April it would suspend nuclear and missile tests and scrap the test site, and instead pursue economic growth and peace.

But the progress appears to have suffered a setback this month with North Korea raising doubts about an unprecedented June 12 summit in Singapore between its leader, Kim Jong Un, and U.S. President Donald Trump.

The North objects to U.S. demands that it unilaterally give up its arsenal of nuclear bombs and ballistic missiles.

Last week, Trump sought to placate North Korea after it threatened to call off the summit, saying Kim’s security would be guaranteed in any deal and his country would not suffer the fate of Muammar Gaddafi’s Libya, unless that could not be reached.

But the reference to the case of Libya has angered North Korea.

“It is to be underlined, however, that in order not to follow in Libya’s footstep, we paid a heavy price to build up our powerful and reliable strength that can defend ourselves and safeguard peace and security in the Korean peninsula and the region,” Choe said.

Choe said the fate of the summit was “entirely” up to the United States.

“We will neither beg the U.S. for dialogue nor take the trouble to persuade them if they do not want to sit together with us,” said Choe.

She said she could suggest to leader Kim that North Korea reconsider the summit if the United States offended the North’s goodwill.

China, North Korea’s sole main ally, said it hoped the summit between Kim and Trump could proceed smoothly, after Trump cast further doubt over whether it would go ahead.

Both countries should cherish the opportunity and all parties should ensure that dialogue leads to a positive outcome, Chinese Foreign Ministry spokesman Lu Kang said at a regular briefing.

Trump said on Wednesday he would know next week whether the summit would take place as scheduled.

White House aides are preparing to travel to Singapore this weekend for a crucial meeting with North Korean officials to discuss the agenda and logistics for the summit, said U.S. officials in Washington, speaking on condition of anonymity.

The apparent destruction of what North Korea says is its only nuclear test site has been widely welcomed as a positive, if largely symbolic, step toward resolving tension over its weapons.

But it comes after North Korean leader Kim declared his nuclear force complete and amid speculation the site was obsolete anyway.

According to recent academic reports, North Korea’s last test, in September, of what it said was a hydrogen bomb, was so large it triggered a collapse inside the mountain, rendering the site geologically unusable for more tests.

Kim has insisted, however, that there were undamaged tunnels at the site, and U.S. intelligence officials have said Punggye-ri remains usable, despite what one official called “some minor geological disturbances” that could be natural or triggered by the September test.