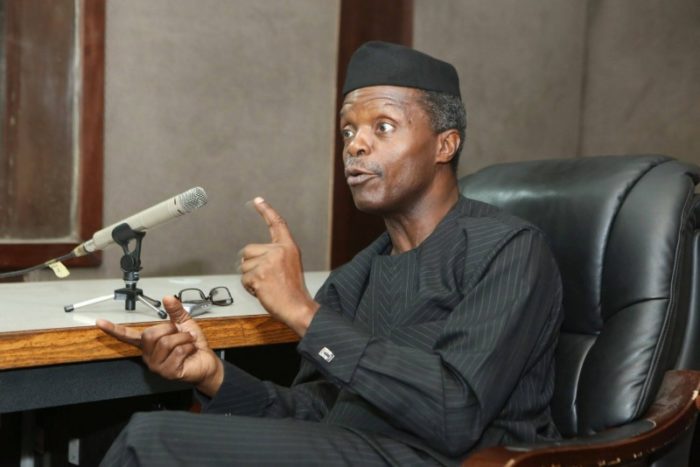 Vice President Yemi Oshibanjo has condemned imposition and arbitrary high surcharges by shipping lines in the West and African countries.

He also tasked the Union of African Shippers Council to adopt common, political and diplomatic strategies to check the operations of shipping lines servicing the ports in the sub-region.

Osinbanjo made the calls on Monday in Abuja while declaring open the sub-regional summit on unfair shipping surcharges and high local shipping charges at the ports of West and Central Sub-region.

He said the surcharges amounts to huge sums of illegal capital flight from the countries of the sub-region and has been depleting their foreign reserves.

He also disclosed that data obtained from the Nigerian Shippers Council (NSC) revealed that about N2 billion is repatriated by multi-national shipping companies from reasonable of demurrage charges for Central Bank of Nigeria in each quarter of the year.

The Minister of Transportation Rotimi Amaechi also condemned the unilateral manner in which transport service providers introduce and increase freight rates on the West African trade through the various surcharges.

He pointed out that the federal government through its partnership with the Global Shippers Forum (GSF) has been checking claims of terrorism, piracy, armed attacks on ships and other negative events in the Gulf of Guinea to increase charges and introduce more Surcharges in Nigeria.

Executive Secretary of the Nigerian Shippers Council, Hassan Bello disclosed that over the last one year, the Council has been negotiating with shipping lines to collapse the myriad of charges to a manageable standard.

He said: “We have actively engaged the shipping lines in Nigeria in comprehensive negotiation on local shipping charges such that all changes must be justified and tied to measurable services and to also ensure no review of charges would be made without negotiation with NSC.”