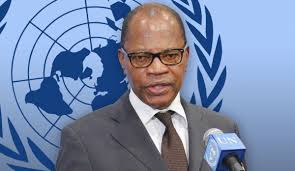 The United Nations has declared that there are increased prospects that the forthcoming general elections in Nigeria will be peaceful and credible.

Special Representative of the Secretary-General and Head of the United Nations Office for West Africa and the Sahel (UNOWAS), Mohamed Chambas, said this in his latest briefing to the Security Council.

Chambas said: “In Nigeria, tensions are high ahead of the presidential and parliamentary elections of Feb. 16, and the governorship and state assembly elections of March 2.

“However, the prospects for peaceful and credible elections have been increased following the signing of the National Peace Accord in Abuja on Dec. 11, 2018.

“Over the coming weeks, I will continue to engage actively with all stakeholders in Nigeria, including through the organisation of peace fora in the key states of Benue, Rivers, Kaduna and Kano.”

The UN envoy said since his last briefing to the Security Council, further progress had been made in democratic consolidation in West Africa and the Sahel, in spite of persisting security challenges.

“However, despite appreciable progress in democratic consolidation in the region, there is a need for continuous efforts to address contentious issues around elections.

“This is to prevent and mitigate election-related violence, as well as to support inclusive dialogue as a key attribute of inclusive societies.

“This is even more important as over the next six months, the region will see several high-stake elections in Nigeria, Senegal, Mauritania and Benin.”

He expressed regret over the rising number of attacks and the increasing sophistication in the tactics deployed by extremist groups, saying it risks undermining the collective efforts in the region.

Military solutions, while necessary, are not sufficient, Chambas said, encouraging all actors to ensure holistic responses, grounded in the respect of human rights, and the socio-economic needs of the population in the affected areas.

“Through inclusive approaches predicated on national ownership, we must continue to work hard on addressing the governance deficits, the extreme poverty and lack of development that feed and sustain armed violence and extremism,” he said.

He said Boko Haram attacks in the Lake Chad Basin over the last months had increased, especially in Borno and Yobe during the last week of December alone.

“Violent clashes between farmers and herders are also continuing, although on a lesser scale, thankfully, than in the first half of 2018,” he said.

In its efforts towards advancing the long-term stabilisation goals of the region, Chambas said UNOWAS continued to work closely with regional partners, including ECOWAS, the G-5 Sahel and the Lake Chad Basin Commission (LCBC).

“Laudable progress was made in the implementation of Security Council resolution 2349 (2017) to support a regional response to the crisis in the Lake Chad Basin.

“On 30 August, the LCBC Ministerial Council adopted a Regional Strategy for Stabilisation, Recovery and Resilience of the Boko Haram-affected areas of the Lake Chad Basin.

“The meeting took place before the high-level conference on the Lake Chad region, which was held from September 3 to 4 in Berlin, during which partners pledged over $2 billion to help meet the needs of the more than 17 million people affected by this crisis.”

He also commended the holding of the ECCAS-ECOWAS joint Summit on July 30 in Lome as an important step towards addressing cross border threats facing West and Central Africa.

As one of the key outcomes of the summit, Heads of State and Government affirmed their readiness to enhance the inter-regional collaboration.

It is to jointly address threats to peace and security, including from violent extremism.

The UN envoy said the leaders also committed to holding regular meetings to identify measures for the prevention and peaceful management of farmer-herder conflicts.