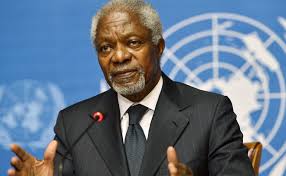 The Secretary-General of the United Nations (UN), Antonio Guterres and staff members, have paid tribute to former Secretary-General Kofi Annan on Wednesday, describing him as a leader who put people at the centre of the UN work.

Kofi Annan died on Saturday at the age of 80 in Switzerland.

During a wreath-laying ceremony in New York, Guterres led staff members in paying respects to Annan, whom they described as the embodiment of the intergovernmental organisation that worked to improve the lives of men and women worldwide.

Annan, a mild-mannered diplomat from Ghana, rose through the UN system to become its seventh leader in January 1997, serving two consecutive five-year terms till December 2006.

“Kofi Annan’s years in office were an exciting time. He put forward new ideas. He brought new people into the United Nations family. He spoke passionately about our mission and role.

“He created a renewed sense of possibility both inside and outside our organisation about what the UN could do and be for the world’s people.

“His most defining features were his humanity and solidarity with those in need.

“He put people at the centre of the work of the United Nations, and was able to turn compassion into action across the UN system,” Guterres said.

He listed some of the actions Annan took to include uniting world leaders to agree global targets on poverty and child mortality – linchpins of the landmark Millennium Development Goals.

“The former UN chief also joined with civil society and the healthcare injury to save lives from HIV and AIDS.

“As his successor noted, Annan also did not shy away from addressing challenging issues.

“Annan faced up to the grave errors made by the United Nations in the 1990s – in its response to the Rwanda genocide and the Srebrenica killings – by shining a light inside the UN.

“The reports he commissioned aimed to make sure such terrible mistakes are never repeated, and set the international community on a new course in its response to mass atrocities,” Guterres said.

Guterres stated that the passing of his predecessor was “a personal loss’’ for many who worked in the UN system.

While the UN flag outside headquarters was flown at half-mast for three days following the announcement of Annan’s death, staff members have been filling a book of condolences with expressions of sympathy to his wife, Nane, and family.

Many UN personnel also have been sharing their memories of a man who they described as “wise yet humble, courteous and charming.”