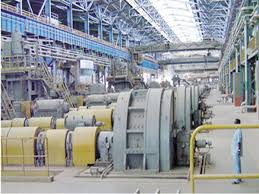 He stated also that the government was desirous to see that ASCL was completed and made operational, and thus solicited the support of the National Assembly, Management of ASCL and other stakeholders in achieving the goal under this Administration.

The BPE statement that disclosed this on Monday noted that the Federal Government of Nigeria has not relented on its effort to address the issues of the Steel industry and rescue it from its current state, foremost among which is the completion and operations of ASCL.

It added that the Government is desirous to achieve this through a robust framework to drive and guide the process for the revitalisation of ASCL and the steel industry in general.

In line with the above and the government’s desire to concession ASCL, a team of key stakeholders made up of Hon. Abdullahi Ibrahim, Chairman, House Committee on Steel (NASS), Alex A. Okoh Director General Imeh Okon, SSA to President on Infrastructure, conducted a fact finding visit to the Ajaokuta complex on August 19th 2019.

The statement noted that: “The main objective of the visit was to ensure the country taps into the potential of the steel sector to transform the Nigerian economy.

Other objectives of the visit were to avail members the opportunity to physically inspect the complex in order to appreciate the quantum of investments made; meet with the management and obtain the management’s option(s) on the issues that affect the plant with the view to enriching the strategy to be adopted for resuscitating the complex.

“The Team verified and confirmed the Management’s claim that many of the machines in the respective units were in a good condition and would only require minor repairs to operate effectively. Additionally, the Team observed that the status of the ASCL plant was not as dilapidated as assumed generally, but that the plant was rather in a reasonably operational state.

“The Team commended the Management of ASCL for maintaining the complex and for using the available internal resources with little external assistance to conduct a technical audit in February 2018 which would assist the government in fashioning out the way forward.

“The Federal Ministry of Mines and Steel Development (MMSD) had given approval for the conduct of the comprehensive technical audit by ASCL Engineers, Technologist, technicians, Craftsmen and other associated professionals, assisted by two (2) Ukrainian consultants and two (2) Engineers assigned by the President of the Nigerian Society of Engineers. The Technical Audit was carried out to ostensibly determine the plant’s integrity and level of completion of the independent units.”

The visiting team and the ASCL Management agreed to work together along with other stakeholders for the realization of the Ajaokuta dream which was in line with the present government’s desire to see to its resuscitation and sustained operations given its strategic role for the development of the Nigerian economy.