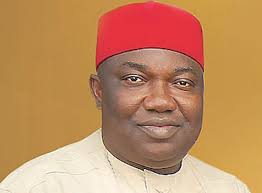 No fewer than 20,000 members of the All Progressives Congress (APC) in Enugu State were among those who defected from the party on Sunday to the People’s Democratic Party Party (PDP) in Enugu State.
The former APC faithful followed the APC Enugu East senatorial candidate in the last election, Lawrence Ezeh, popularly known as Prince of Mburubu, who also dumped the party, back to the PDP.
Ezeh and his followers were received at an impressive reception by Governor Ifeanyi Ugwuanyi.
Ugwuanyi described the move back to the party as a “family affair.
“Enugu State PDP is one united family. You left and you are now back. We welcome you back and say that we are happy, because you are very important to us,” the governor told Prince Ezeh and members of his campaign organisation, Aka Ekpuchi Onwa Campaign Organisation and the former APC members.
Ezeh had earlier thanked Nkanu East chapter of the party as well as the state and the government.
He also expressed gratitude to the Governor for keeping tab on him all through the period he was absent from the party.
“Before the elections, we were together; after the elections, we were also together, because you never allowed me to rest until I agreed to return to the PDP,” Ezeh said.
Ezeh was a frontline member of the PDP in Enugu State, but defected from the party in 2018, when he dumped the party for the APC after he failed to secure the PDP ticket to contest Enugu East senatorial seat.
He was defeated by a former governor of the state, Dr. Chimaroke Nnamani, who won the election held on February 23, 2019.
Prince of Mburubu is the CEO of Buzuzu Construction Company Limited, Port Harcourt.
He became the favourite of his people after using his personal funds to construct a 4.5 kilometer road in his Mburubu community, with ditches and street lights.
Ezeh has also been in the limelight for the grading of link roads in Nkanu land as well as granting lifetime scholarships to more than 67 students in Enugu State.