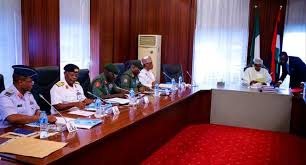 President Muhammadu Buhari, on Tuesday, met with the security chiefs in Abuja, the nation’s capital.

The security chiefs were led to the meeting by the Minister of Defence, Mansur Dan Ali.

Those in attendance included the Chief of Defence Staff, General Abayomi Olonisakin, and the Chief of Army Staff, Lieutenant General Tukur Buratai.

Others were the Chief of Air Staff, Air Marshal Sadique Abubakar, and the Chief of Naval Staff, Vice Admiral Ibok Ekwe Ibas.

The acting Inspector General of Police, Mr Mohammed Adamu, as well as the heads of the National Intelligence Agency (NIA) and Department of State Services, were also at the meeting.

Other members of the cabinet present are the National Security Adviser, Babagana Monguno, and the Minister of Interior, Abdulrahman Dambazau.

President Buhari received briefing from the security chiefs four days to the governorship and state house of assembly elections scheduled to hold on Saturday.