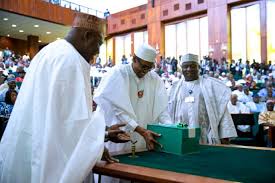 The Federal Government predicated the budget on an exchange rate of N305 to one United States Dollar; and a daily crude oil production of at 2.2 million barrels and at $42 per barrel.

He explained that for the country to effectively diversify from oil, it would need oil money for to jumpstart other sectors of the economy.

Tagged ‘Budget of economic recovery and growth’, he said, it was centered on empowerment of agriculture and manufacturing, noting that it would bring the nation out of recession.

On national security, the President said government would continue to fortify “our defence’’ and spend on it till “all our enemies within and without are subdued.”

The government retained N500 billion social intervention fund in the 2017 budget, the same as was budgeted for this year.

The President appealed to governors to make land easily accessible to farmers to boost food production.

Early in the morning, protesting Super Falcons were at National Assembly gate to draw the lawmakers’ attention and that of Buhari to the failure of the nation’s sports authorities to pay their allowances after winning the Women Africa Cup of Nations (Afcon) Championship in Cameroun.

The House of Representatives on Tuesday adopted the 2017 to 2019 Medium Term Expenditure Framework (MTEF) and Fiscal Strategy Paper (FSP) as President Muhammadu Buhari presented the 2017 budget estimates to a joint session of National Assembly.

The House fixed the exchange rate of Naira to a dollar at N350 as against the N290 recommended by the executive.

The House also concurred on the oil benchmark of USS42.50 per barrel with a proposed production of 2.2 million barrels per day.

Consequently, the House had mandated its joint committees on Finance, Appropriation, National Planning and Economic Development, Legislative Budget and Research and Aids, Loans and Debt Management to further scrutinise the budget document.

The News Agency of Nigeria (NAN) reports that Buhari had on October 4, 2016 forwarded a request to the National Assembly seeking for approval of the 2017 to 2019 MTEF and FSP.

Moving the motion for the adoption of the MTEF/FSP, House Leader, Rep. Femi Gbajabiamila of APC, said Section 11(2) of the Fiscal Responsibility Act, 2007, provides that “the MTEF shall be considered for approval with such modifications if any, as the National Assembly finds appropriate by a resolution of each House of the National Assembly”.

He further noted that Section 11 (3) of the FRA, 2007, states that “the MTEF shall contain, among other things, a macro-economic framework setting out the macro-economic projections for the next three financial years.

“The underlying assumptions for those projections and an evaluation and analysis of the macro-economic projections for the preceding three financial years”.

The House Leader said that some analysts forecasts that the shortage of forex supply may push exchange rate to as high as N350 to the dollar in the official and N500 in the parallel markets.

He recommended that “the budgeted exchange rate of N290 per dollar is unrealistic and should be moved to N350 to encourage foreign capital inflows”.

On crude oil, he said that “the proposed oil benchmark is 42.50 dollars per barrel with a daily production of 2.2million barrels per day.

Gbajabiamila explained that “with current price level of over 50 dollars per barrel and Nigeria’s current output at 1.9 million barrels per day, the estimates are conservative enough especially with OPEC output freeze last week”.

He maintained that the revenue target of N4.169 trillion and total expenditure of N6.687 trillion were audacious to move the country out of recession.

He said: “These are achievable only on effective combination of strong fiscal and monetary tools by government, increasing the tax base in the country.

“Curtailing militancy in the Niger Delta and injecting back looted funds, diversification of the country’s revenue sources, controlled government spending and strong anti-leakage and

anti-corruption drives”, are essential, he noted.

Also consumption was projected to increase to N80.5 trillion.

“These budget growth levels in GDP and inflation are not achievable in 2017.”