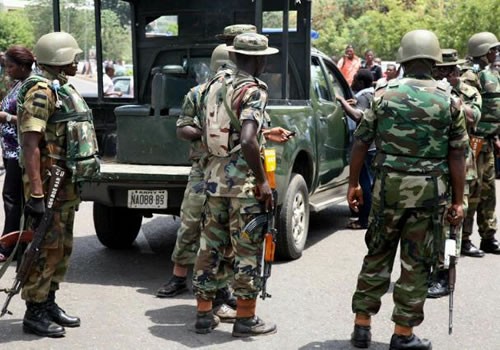 The Coalition of United Political Parties (CUPP) has expressed displeasure over the recent invasion of Daily Trust newspaper Abuja and Maiduguri offices and the arrest of some of their journalists by military operatives.
Daily Trust had in a press statement issued by its CEO, Editor-in-chief, Mannir Dan-Ali on Sunday said, “For four hours on Sunday January 6th 2019, armed soldiers who came in five vehicles occupied the head office of Media Trust Limited, publishers of Daily Trust titles, sending away journalists and some other staff. Before the siege was called off at about 9:30pm, the soldiers had ransacked the newsroom and carted away dozens of computers while effectively strangulating the production of the Monday edition of the paper.
Earlier in the day at about 4 pm, another detachment of soldiers and plain cloth security officials went to the Maiduguri regional office of the company and conducted a search at the end of which they took away the Regional Bureau Chief, Uthman Abubakar and a reporter, Ibrahim Sawab.
Neither the company nor the families of the 2 reporters have heard from them since their abduction. A production staff who was taken away from the Abuja head office with the company’s computers was released after he was detained for a while at the Mogadishu barrack in Abuja.”
Reacting to this, the National Spokesperson of CUPP, Ikenga Imo Ugochinyere described the invasion as unacceptable in a democratic system. He noted that the press, which is an integral and indispensable element of the society, exists for the society and it derives its powers to function from the constitution.
According to him, “As stipulated in Chapter II section 22 of the 1999 constitution. The press, radio, television and other agencies of the mass media shall at all times be free to uphold the fundamental objectives contained in this chapter and uphold the responsibility and accountability of the government to the people. This provision implies that the press shall be a watchdog over the excesses of government, and shall ensure that government delivers it promises to the people. The government on the one hand shall ensure that the press informs the people about its programmes and actions.”
“The free society which comprises of people of different ethnic, religious, socio-economic backgrounds are also entitled to free information, as such chapter II section 39 subsection (1) of the 1999 constitution states that every person shall be entitled to freedom of expression, including freedom to hold opinions and to receive and impart ideas and information without interference.”
“Without prejudice to the generality of subsection I of this section, every person shall be entitled to own, establish and operate any medium for the dissemination of information, ideas and opinions.” He stated that the existence of these constitutional provisions defines the society with many elements such as the media, police, government, armed forces, citizenry, their rights and boundaries of operations.
The Buhari APC led administration have said in several occasions that they want a free and fair elections in February but their actions is totally different from what they say.
How can you say that you hope for credible polls in 2019 when the media which is the integral part of ensuring credibility are being oppressed?
Nigeria is going through a lot right now, poor economy, poverty and especially insecurity issues bedevilling the northern part of the country.
The President should be more interested in solving these insecurity issues rather than oppressing the Press who are just doing their job as written in the constitution.
“The North-Central, North-East and North-West zones were the apex of killings in 2018, with states like Borno, Benue, Plateau, Zamfara, Kaduna, Kogi, Nasarawa and Taraba being the centre of these killings. 2018 has been an omen of death and tears for our people. No states were spared in the terrible murders. Thousands of Nigerians across the country were slaughtered through the Boko Haram attacks, kidnappings, armed robbery, herdsmen and farmers clashes and so on.”
The Presidency and its APC cohorts should save themselves the little dignity they have left, and do something right for once. Focus their rage on Boko Haram rampage and let the press do their works.
We hereby demand for the immediate release of the journalists of Daily trust newspapers and full compensation for any damages that occurred in the process of the siege.