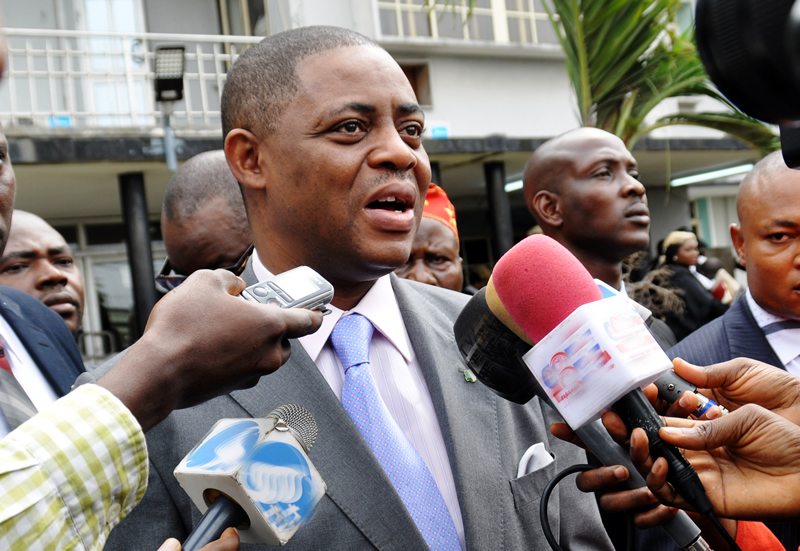 A former Deputy National Chairman of the Peoples Democratic Party, Chief Bode George, has described Governor Ayodele Fayose as an ingrate for saying that he would not support him (George) to become the national chairman of the party.

George also slammed Fayose for saying that PDP elders must take the backstage in the party’s affairs.

Speaking during an interview with Channels Television on Sunday, Fayose had blamed the loss of the 2015 general election on the elders of the party.

Fayose also dismissed the report that he was supporting the acting National Chairman of the PDP, Modu Sheriff, so that he (Sheriff) could pick him as his running mate when Sheriff finally declares his intention to run for the presidency.

The Ekiti governor had said, “Chief Bode George told me personally that he wanted to be the national chairman of the party, I told him no, that I won’t support him. With all due respect to the elderly people in this party, they must take the backstage. People are tired of seeing the same old faces again.”

But speaking in an interview with our correspondent on Monday, George said Fayose was opposing the interest of the South-West in the party, adding that his comments showed that he was an immature politician.

While stressing that the party needed experienced and matured leaders to pilot its affairs, George said age was not a barrier to good leadership but an asset.

He said the National Chairman of the All Progressives Congress, Chief John Odigie-Oyegun, was older than him.

George said if the chairmanship position was eventually zoned to the South-West, he would consult with family and friends on whether or not to contest, adding that politics was not a do-or-die affair.

“The kind of chairman the PDP needs is someone that has integrity, one that is trusted and established,” he said.

George added, “Fayose spoke very immaturely during the interview. For him to have said that the founding fathers of the party should take the backstage in the party’s affairs was very disgusting and self-deceitful. I actually told him at an old meeting of the party that if the chairmanship of the PDP was zoned to the South-West, that I would show interest. He told me he had heard.

“Fayose is an ingrate because when the world was against him during his first term in office, God used me to give him support. I contributed N250,000 to purchase his campaign clothes. We must defend the interest of Yoruba because we have been sidelined in the party’s leadership for too long. Fayose and Senator Buruji Kashamu cannot continue to decide for the Yoruba people in the PDP.”

He added that Fayose’s claim that he reached out to Senator Bode Olajumoke to contest the chairmanship position was not true.

He said, “Fayose claims to be a Christian. Let him go and read the book of Micah, chapter 7, from verse 1-10 to learn more about leadership.  Many people showed interest from the South-West, even Prof. Tunde Adeniran showed interest. Bode (Olajumoke) knows that Fayose is playing around. Bode and I discussed because we are friends.”