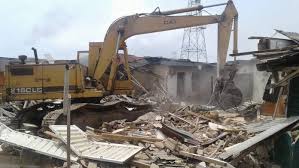 The Gate House within the premises of DAAR Communications, owners of African Independent Television (AIT) and RayPower FM, has been demolished.

It was gathered that the demolition exercise was handled by officials of the Federal Capital Territory Development Authority (FCDA).

The officials arrived the Abuja office of DAAR communications around 11am on Tuesday, before pulling down some structures.

Luckily, the gatehouse is not an operational building, so the demolition will not affect broadcasting.

It is still not clear why the demolishing is taking place but the action has caused panic among workers and residents of the area.