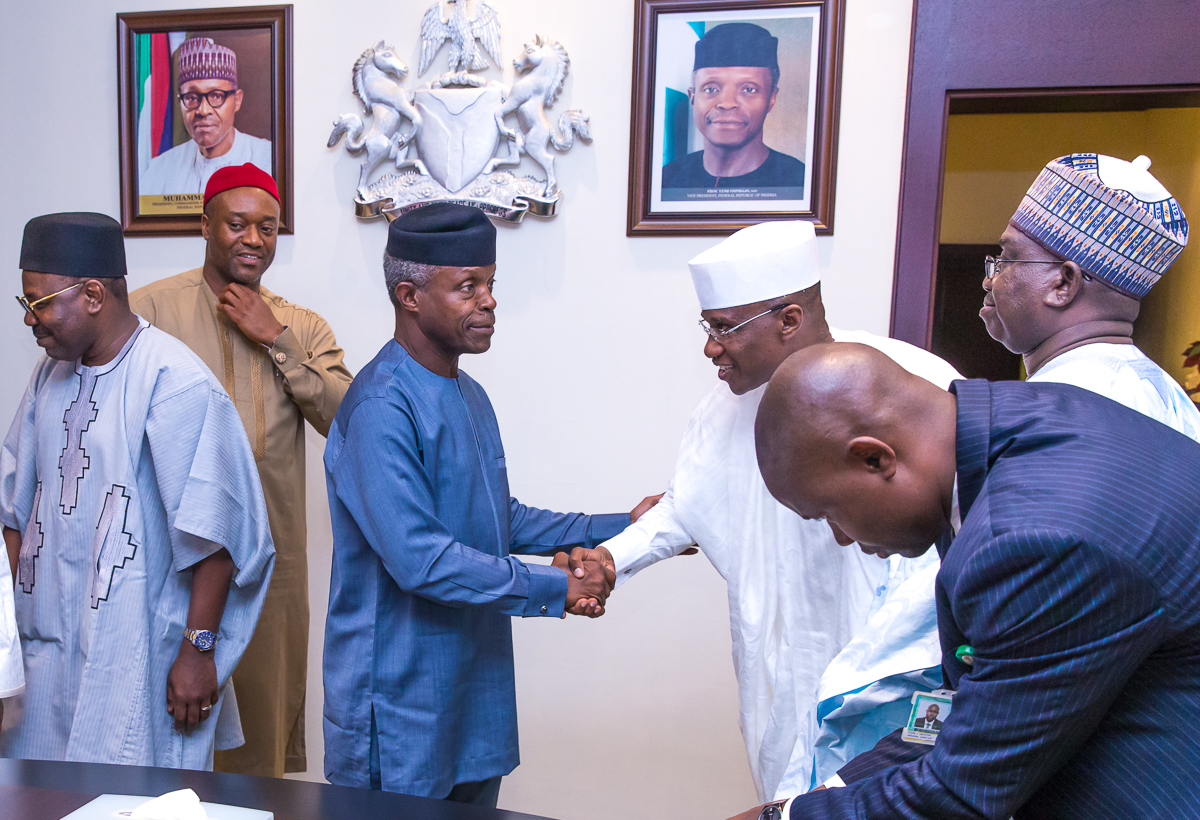 Vice President, Prof Yemi Osinbajo, has said the Federal Government would deal decisively with individuals and organisations that made the list of high-profile obligors of Asset Management Corporation of Nigeria (AMCON). The Vice President who was speaking at the weekend said these debtors have made it impossible for the corporation to resolve its outstanding N5 trillion debt thereby holding the entire nation to ransom with their bad behaviour.

Osinbajo who is the Chairman of the Economic Council also disclosed plans by government to set up an inter-agency collaboration framework that would comprise relevant government Ministries, Departments and Agencies (MDAs) and supervised by the office of the Vice President to ensure that institutions and individuals that are indebted to AMCON are not allowed to do business with government henceforth.

The Vice President who spoke when he received some Board members and Management of AMCON at the State House, Abuja led by the Board Chairman, Dr. Muiz Banire, said the Federal Government under the leadership of President Muhammadu Buhari, will no longer fold its hands and allow a few individuals that owe AMCON huge sums of money walk freely on the streets in the country.

He said: “I think the time has come for us (Federal Government) to set some examples with some of these top debtors of AMCON, which I believe will set a good example and serve as deterrent to others.”

Osinbajo who said he was impressed with the performance of the executive management of AMCON under the leadership of Ahmed Lawan Kuru for the recovery successes that have been achieved so far against all odds, also promised that the Federal Government would give AMCON whatever support that is necessary to enable them go after the obligors that have remained recalcitrant despite the olive branch extended to them over the years by the recovery agency of the government.

He said, “I congratulate AMCON for the work done so far having recovered over N1 trillion and counting both in cash and in assets. The work you do as a recovery agency is not something that is particularly easy or encouraging because we all know how Nigeria works. But we are committed to working more closely with your administration to ensure that these monies are recovered from AMCON obligors because it will help our economy and provide the government with more money to continue to improve on the development of infrastructure across the nation.”

Osinbajo said in the next couple of days, he would invite the AMCON team alongside other relevant MDAs to discuss and fine-tune plans on how to ensure that anybody or agency that is a debtor to AMCON are completely made to face the wrath of the Federal Government as those who are indebted to the government are direct enemies of both the government and the people of Nigeria.

Earlier in his presentation, Dr Banire who said AMCON’s visit to the Vice President was to congratulate him and President Muhammadu Buhari on their recent victory at the polls, also highlighted some of the challenges and frustrations faced by AMCON as a result of the attitude of some debtors who behave as if they are above the law in the country.

While calling on the government to rally round AMCON if they indeed want the corporation to succeed, Banire said, “AMCON has been able to recover over N1 trillion since inception to 2018-year end. Out of the recovered sum, cash accounted for 60 per cent while non-cash assets such as properties and equity securities accounted for the balance of 40 per cent. Over the same period, AMCON’s repayment of its indebtedness to the CBN was over N1 trillion.

“As at end of December, 2018, AMCON’s Assets Under Management (AUM) amounted to about N172.5 billion. It is noteworthy to state that out of the total real estate properties, assets available for sale is valued at N62 billion. Of this N62 billion about 83 per cent comprises of bare land and other assets, which may need considerable improvements to convert into income generating assets. “Your Excellency may recall that in September 2018 following the takeover of Skye Bank Plc by the Central Bank of Nigeria (CBN) and the Nigeria Deposit Insurance Corporation (NDIC), AMCON was again invited to inject a total sum of N898.45 billion as capital thereby leading to the emergence of another bridged bank named Polaris Bank Limited.

“The intervention in Skye Bank was caused majorly by internal abuse by the operators. As a result of that development, AMCON’s total debt obligation to the CBN, is currently in excess of N6 trillion. And it is evident that the Federal Government cannot afford to write off this debt in the short term, hence, our moral obligation to pursue obligors and recover the debts owed. But, despite the successes recorded, the corporation has been facing a number of challenges, which includes obligors resorting to all manner of tactics to avoid honouring their obligations.

“Whilst some are still enjoying government patronage, others are using the judiciary and adopting legal technicalities to stall recovery, which is why we need a new strategy to enable AMCON meet its mandate before sunset.”

Kuru in his own submission while acknowledging the Vice President for his support to AMCON all these years however added that he cannot wait for the take-off of the inter-agency collaboration, which Prof. Osinbajo talked about because such a move would compel all sister agencies to be on the same page in the interest of the country.

Kuru also reminded the Vice President that AMCON’s debts sits on the government’s balance sheet with CBN, and failure to recover may result to serious consequences including recourse to tax payers’ money, which must be avoided.

He said for an organisation like AMCON with sunset date, all hands must be on deck to provide the support required.

According to him, considering the huge portfolio of debt, no obligor must be allowed to go scot free no matter how highly placed in the society.