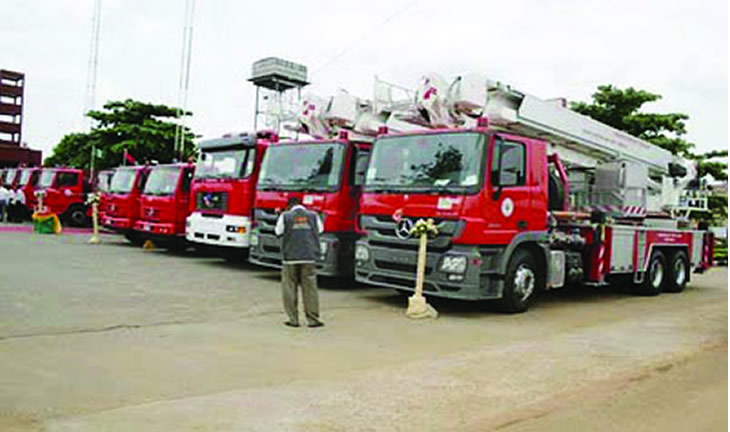 Lagos State Government has said about N99.7 billion worth of properties were saved from fire incidences recorded in the State in the last one year.

Commissioner for Special Duties and Intergovernmental Relations, Mr. Oluseye Oladejo who disclosed this during the Ministerial Press Briefing held at the Bagauda Kaltho Press Centre, Alausa to commemorate the second year in office of Governor Akinwunmi Ambode’s administration, said the government stepped up its emergency apparatus to respond to fire disasters and other emergency situations.

“I can give you some information about the value of the properties saved from fire disasters and that would give an estimate total of N99.72billion during the period under review and the estimated properties lost totals N16.62billion,” Oladejo said.

Speaking further, the Commissioner said that in line with the State Government’s resolve to prevent and manage fire outbreaks across the State, Governor Ambode approved the creation of four new fire stations in the State.

“As at now, Lagos State can now boast of 14 (Fourteen) Fire Stations across the State and all are equipped to combat fire outbreak”, he added.

Oladejo said government had scaled up activities in Monitoring and Surveillance in the State and also intensified safety advocacy campaign in order to inform, educate and enlighten the public on the prevention and management of fire outbreaks.

He said the Lagos Safety Commission is saddled with the responsibility of setting safety standard for business premises, event centres, churches and other public buildings.

“They don’t have any no-go-areas to ensure that we put safety measures in place in the course of construction and the rest of it. That is the preventive part of our business. For rescue, that is the business of other agencies like Fire Service, Lagos State Emergency Management Agency (LASEMA),” he said.

Oladejo, therefore, called on stakeholders to join hands with government in a bid to reduce emergency response time while also urging Lagosians to explore the limitless opportunities available on the platform of the State Command and Control Centre and continue to call the emergency toll free lines – 767 and 112 for distress calls.

“You can be assured of prompt response from these numbers on a 24-hour basis”, he said.

He said the government’s decision to replicate the Lagos Response Unit (LRU) in other locations in the State was to take the service closer to the people, noting that emergency rescue was a matter of response time and proximity of the service providers.

“So that informed the position of the government to establish one at Lekki and we are also establishing one at Ikorodu Road where we used to Bode Benson Hotel and we are also establishing one at Badagry. When you look at the spread, you would see that our intention is to take the service closer to the people. In the years ahead, we also hope to put up more structures to attend to the needs of Lagosians”, Oladejo said.

Responding to complaints as to why some members of the defunct Neighbourhood Watchers were not absorbed into the recently inaugurated Neighbourhood Safety Corps (NSC), the Commissioner explained that some were found wanting during the period of screening, adding that those who passed the screening have been employed into the Corps.

“What the Governor said was that they should be given priority and they should be examined and put through the normal screening which other applicants would also go through and they are accessed based on their mental, physical and psychological fitness to fit into the new scheme.

“You will agree with me that some of these people we are talking about are as old as 65 to 70 years and you just wonder what manner of security somebody like that would do and some were also found wanting in regards to their health status.