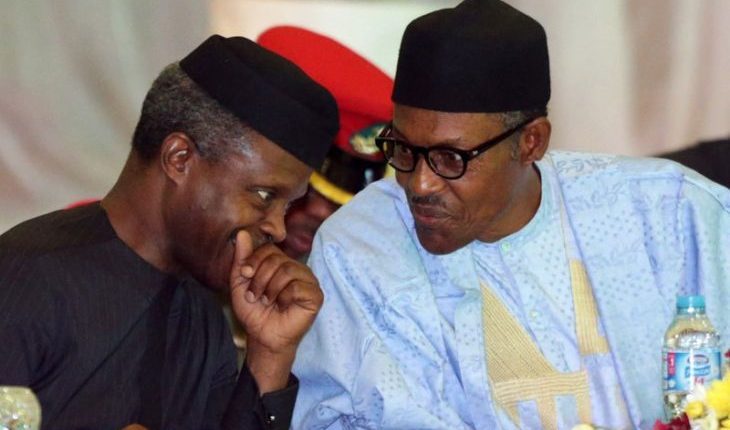 The Initiative to Save Democracy, a pressure group, says that the relationship between President Muhammadu Buhari and Vice President Yemi Osinbajo remains mutually respectful.

The group’s President, Mr Oladele Peter, in a statement on Wednesday in Abuja, condemned individuals and groups sowing seeds of discord between both leaders.

The statement came at the heels of speculations about a crack in the relationship between Buhari and Osinbajo,

“As much as we know, the relationship between the president and the vice president remains cordial and any group or individual insinuating otherwise should desist as this is capable of distracting the leadership of the country and plunging the nation into political crisis.”

He attributed the development to some faceless elements desperate for power, adding that the group had uncovered another plot by the same individuals to make public some fake documents with the aim of defaming Osinbajo.

Peter, however, assured that the attempts of the elements would remain futile, noting as the truth about everything would eventually come to light.

“What all these point to is what seems a likely continuation of the failed Dubai Strategy of opposition elements, or at least something comparable to it.

“Whatever it is, it would also be seen for what it is, baseless and without any substance and doomed on arrival.”

On reactions by Femi Fani-Kayode, Oladele said that the former aviation minister’s claims were total lies.

“It is total fabrication of lies; Fani-Kayode should substantiate the claim about the secrets the vice president has with former NIA Director-General, Amb. Ayo Oke.

“When 43 million dollar, N23 million, 27,800 pounds were found in the possession of the former director-general, Osinbajo insisted that he should explain himself and defend himself of the charges.”

Peter described as ridiculous claims by Fani-Kayode that Osinbajo had been demoted or humiliated as a result of the recent development in the presidency.

According to him, the president has simply adopted a different strategy as he is entitled to how he manages the Federal Government’s economic management affairs.

“The vice president continues to be Chairman of the National Economic Council by virtue of the Constitution.

“This is the organ that oversees the economic affairs of the federation.

“As a matter of fact, Osinbajo will be presiding over the meeting of the National Economic Council (NEC), tomorrow.”

He urged Osinbajo to remain focused in his efforts to ensure a better and stronger Nigeria.

Peter implored Nigerians to disregard utterances and comments by those he described as ‘agents of disunity and destruction’.

“Attempts to sow seeds of discord between the vice president and the president will fail and already failing because both of them have a mutually respectful relationship.

“The vice president does not need Fani-Kayode’s help and that of other foolish pretenders, whom when they had the opportunities to serve in public, made a mess of national and economic affairs, compelling the Nigerian people to sack Fani-Kayode and his infamous party.”

Responding to comments credited to the Yoruba socio-cultural group, Afenifere, Oladele said the views of spokesman for the group, Mr Yinka Odumakin, was unfortunate and not surprising given Odumakin’s antecedence.

“It is laughable to conclude that Office of the Vice President occupied by Osinbajo has been rendered impotent and irrelevant.

“As already stated, Osinbajo will chair tomorrow’s NEC, an important body recognised by the Constitution of Nigeria, especially in taking decisions affecting the entirety of the country including the states.

“It is pertinent to note that Osinbajo has not been removed from office, and contrary to what Odumakin wants Nigerians to believe, the vice president has not been indicted or found wanting,” he said.