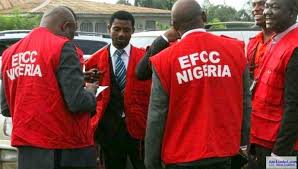 The North East zonal office of the Economic and Financial Crimes Commission (EFCC) in Gombe said it received 81 petitions in the first quarter of 2019 (January to March).

Head of Operations in the zone, Mr Michael Wetkas, disclosed this on Monday while briefing newsmen on activities of the commission in 2019 so far.

Wetkas said that out of the 81 petitions which had been charged to court, 37 convictions were secured.

He added that more than 70 per cent of the petitions come from Gombe state alone.

The head of operations said that N55, 65 million was recovered in cash and draft while property worth N18.8 million were forfeited to the Federal Government, following trials before the court.

He added that two cars – a Peugeot and a Honda yet to be valued – had also been forfeited while several properties were subject to being forfeited as trial was on-going.

According to him, the commission has also made progress in the fight against vote buying in an effort to enhance the credibility of elections in the zone.

“Before the 2019 general elections, the Acting Chairman, Ibrahim Magu, introduced the aspect of election monitoring and we told people that selling or buying vote is an offence.

“By our estimate, it is a big success and I have reasons to tell you that in Gombe state, eight people were arrested including one serving local government chairman and two councillors during the election.

Wetkas said that the common crimes in the state were currency counterfeiting, employment and land related.

He said that three persons had so far been convicted for counterfeiting currency.

He appealed to youths to cultivate the habit of verifying employment opportunities so as not to fall victims, sying that government jobs were not for sale.