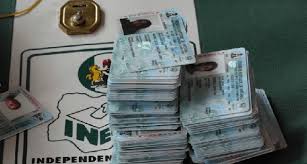 The Independent National Electoral Commission has said it will resume the distribution of 11,228,582 uncollected permanent voter cards this month.

The INEC National Commissioner and Chairman, Information and Voter Education, Mr. Festus Okoye, in an interview with our correspondent, noted that all the uncollected PVCs were still locked up at the Central Bank of Nigeria as promised by the commission until after the elections.

Okoye, however, noted that a supplementary election in Rivers State had yet to be concluded.

“All the uncollected PVCs are still locked up because we promised to resume after the elections and, so far, we have concluded some of the elections. The last bit of elections will be done in Rivers State this weekend.

Speaking on PVCs destroyed at the INEC office in Qua’an Pan LGA, Plateau State few days before the elections began, the INEC commissioner said the cards had been reproduced for all the voters who submitted their names for new PVCs.

“They (the PVCs) were taken to the local governments and the owners came and collected a substantial number of them,” he added.

Okoye also stated that the commission would set a date for the commencement of new registrations.

He said, “We are just coming out from a major election and in the 2019 regular budget of the commission, we made provision for the acquisition of new direct data capture machines that will enable us commence continuous voter registration.

“So, I’m sure that the moment we finish we call ‘reverse logistics,’ that is, getting old materials that were used for the elections back to the custody of the commission, we will announce the date for the commencement of registration of voters.

The INEC commissioner called for a multi-stakeholder approach to bolster voter registration and PVCs collections, adding that voters should refrain from waiting till the last minute to register for or collect their voter cards.