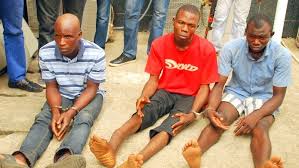 Suspected kidnappers have killed a dog at the residence of their victim after they discovered she was not at home.

The kidnappers were said to have overpowered security personnel on night duty identified as Abubakar Aminu and ordered him to lead them to their target, Mrs. Emily Owie.

Family sources said the gunmen killed the dog out of frustration and tied up the night guard.

Husband of the lucky victim, Mr. Parry Owie, told newsmen that he was yet to come to terms why his wife was targeted.

Owie stated that his wife had been victim of several kidnap attempts and robbery attacks which led to her to lost 12 weeks old pregnancy.

He said his wife was first kidnapped in 2010 alongside their three months old baby and her younger sister after which he paid the sum of N3m for their release.

Owie said his wife was kidnapped again in 2014 near a supermarket at Ugbor in Benin City where she went for shopping and spent three days in captivity.

He said she was released after payment of ransom.

Owie said he and his family had gone underground for fear of being attacked or kidnapped.

He said the matter has since been reported at the anti-kidnapping section of the Edo State police command for investigation.