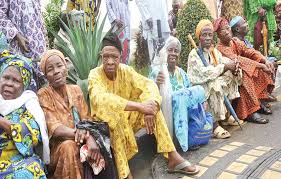 The acting Chairman of the National Salaries, Incomes and Wages Commission, Ekpo Nta, has assured pensioners that their earnings will also be increased after the Federal Government reaches an agreement with organised labour on the new minimum wage.

Nta gave the assurance in Abuja on Friday when the National President of the Nigeria Union of Pensioners, Abel Afolayan, led the union’s leadership on a visit to him.

Earlier, Afolayan had told Nta, “The issue is that the vast majority of the pensioners rely on the token they receive for survival. Tension has died down with the agreement reached between the FG and organised labour over percentage consequential adjustments increase; but with the pensioners, the tension is high, and if we don’t have anything tangible to present to them or tell them at our meeting next week in Ibadan, there will be problems. They (pensioners) will say when are we having our own structure and templates?

“We still have people earning N2,000, some earning N10,000. Vast majority of pensioners in this country earn below N10,000. It is people in this category that are agitating. We want to know when our own work will start on your table.”

Nta told the pensioners their allowance was not ignored during the minimum wage negotiation.

He said, “This is the time we should have a major reform in our pension administration concerning the pensioners. There must be total U-turn of pension management in the country. It is a huge repository of funds and you must be abreast of what is happening. Certain per cent were deducted from the pensioners’ salary when they were working and they must know how this fund is being spent.

“You should not be asking for peanuts because if you don’t do it now, the problem that will come will be worse than the past. I agreed entirely with you; what I am saying is that it would be done.

“We must have a policy from the local government to the FG level on how to take care of our senior citizens. Everybody was aware during negotiation on the minimum wage and its consequential adjustment that there must be corresponding increase for pensioners and we shouldn’t wait for agitation again before we do that.”

He added, “If for workers it is N30,000, then you must also define what minimum earning pensioners should get. I know that government is already working on it. It is being addressed because all along the negotiations, it has always been in consideration, and it was asked at the Federal Executive Council meeting; so everybody is aware that it must be done.”