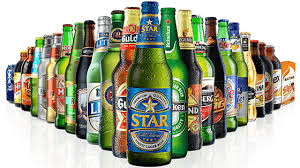 Nigerian Breweries Plc, the leading brewing company in the country, has demonstrated its strong commitment to the promotion of intellectual talent through the sponsorship of the Lagos International Poetry Festival, which attracts poets from across the world.

The five-day festival, the fourth in the series, with the theme “Wide Awake”, got off the ground on Wednesday, October 31, 2018, at the Freedom Park, Lagos.

Managing Director of Nigerian Breweries Plc, Mr. Jordi Borrut Bel said that, in line with the company’s philosophy of “Winning with Nigeria”, it recognised that the arts play an important role in the strengthening of the cultural values of the society.

Borrut Bel stated that the sponsorship of the Lagos International Poetry Festival remains a significant part of a broad spectrum of NB Plc’s initiatives, which cover areas such as health, water, education, talent development and youth empowerment.

He affirmed that poetry is a tool for the reengineering of society towards the objective of achieving progress, explaining that it does not only interpret society or serve as its mirror, it also helps the people to imagine better ways of living together.

“With the sponsorship of this festival since its inception in 2015, we believe we can help to contribute to the breeding of young, emerging talent, engender conversations on critical issues and create a shared performance space for poets across the country and the world,” he said.

This year’s theme examines the rousing wave of discontenting voices that tip political and social power structures from the global North to the South and reinvigorate conversations on accountability, transparency and social justice.

On his part, the Founder/Director, Lagos International Poetry Festival, Mr Efe Paul Azino commended Nigerian Breweries for the enormous resources put together to make the festival a success, like it did in the past editions.

He stated that in the past four years, the Lagos International Poetry Festival has had 24 workshops and over 250 guests that have amazed the audiences through poetry.

Azino explained that part of this year’s edition is to remember tradition and bring the old and young poets together to express their voices on contemporary issues.

During the opening ceremony, Lebo Mashile, the edition’s Poet-in-Residence from South Africa, thrilled the audience with performances that portray Africa’s social and ethical values.

Over the years, Nigerian Breweries has sponsored several art focused initiatives such as the partnership with the African Artists’ Foundation to sponsor the National Art Competition, the Farafina Trust to sponsor the Creative Writers’ Workshop as well as the recently concluded Heineken Lagos Fashion and Design Week.