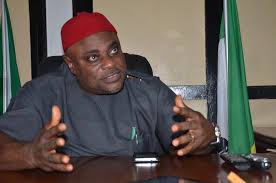 A new faction of the All Progressives Grand Alliance (APGA), The Authentic APGA (A-APGA), has called for the immediate resignation of the party’s national chairman, Dr Victor Oye over alleged gross misconduct and corruption.
The faction led by Chief Jerry Obasi as national chairman and Alhaji A D Musa as national secretary while addressing journalists at a press briefing in Abuja on Friday, alleged that the embattled national chairman of APGA has failed to improve the fortunes and good image of the party.
According to Obasi, “Oye has taken APGA beneath the point he met it. At no time in the history of the party has a national chairman of APGA been so associated with widespread accusations of bribery, extortion and other unwholesome acts.”
He said the complaints coming from Imo, Abia and Anambra state chapters of the party detailing the exchange of bribes in foreign and local currencies, are too weighty to be swept under the carpet.
He further said that his faction is on a rescue mission to save APGA from the hands of people whose only interest is what they can gain. In his words, “We are of the opinion that the situation in APGA at the moment calls for radical solution. We have to decide whether to continue on the evil trajectory of impunity and political villainy or adopt a strategic template to guarantee the revival of the fundamental ideals that propelled the formation of APGA.
“Based on the foregoing, we have come to the inevitable conclusion that we must come together to recalibrate APGA in line with the dictates of our shared values and ideological purity of being our brother’s keepers indeed.”