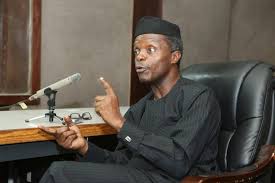 The Federal Government has reached out to the United States government to seek its support in the repatriation of proceeds of crime and corruption.

The Vice President, Professor Yemi Osinbajo, asked a US congressional delegation that visited him on Monday at the Presidential Villa to assist the country in its fight against corruption.

Professor Osinbajo said on his twitter handle that government was doing everything possible to ensure that corrupt officials do not get a safe haven abroad.

He reiterated the commitment of President Muhammadu Buhari’s administration to riding the nation of corrupt practices.

The Vice President told the delegation that the present administration regards corruption as an existential threat that must be dealt with at its root. source Channels TV