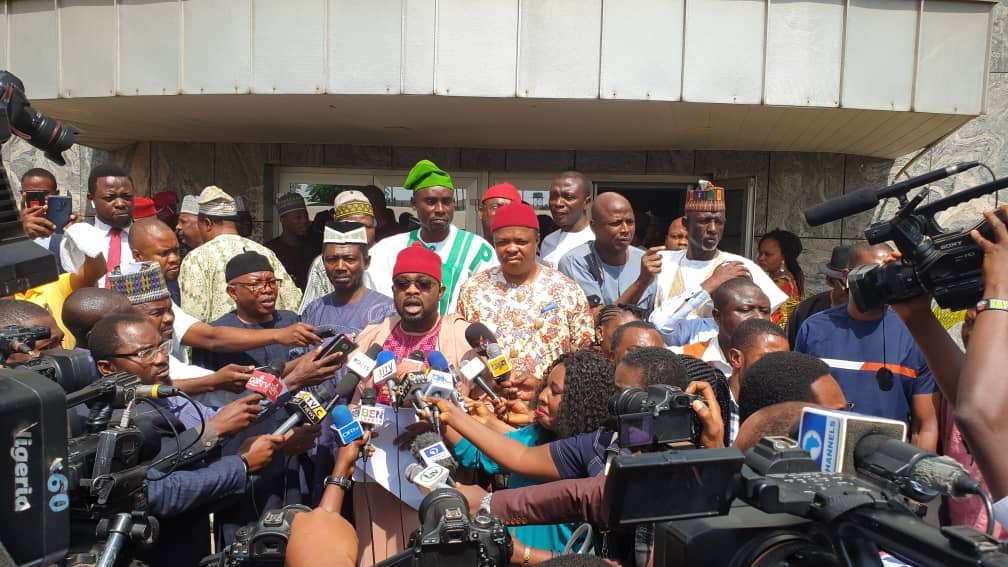 The ongoing meeting of the leadership of Independent National Electoral Commission (INEC) led by its chairman, Prof. Mahmood Yakubu and National Chairmen of 91 Political Parties under the aegis of the Interparty Advisory Council (IPAC),snowballed into crisis over the issue of production of the 2019 election guideline without the consultation and notification of the chairmen of Political Parties.

The Party chairmen said the guideline was smuggled into the meeting with obnoxious clauses and strange inclusions that will lead to massive rigging of the 2019 election.

Trouble started when the national chairman of the Action Peoples Party (APP) and the Spokesperson of IPAC, Ikenga Imo Ugochinyere, raise the alarm on the release of the guideline without the input of the chairmen and tampering with the clauses. This observation got the support of the chairmen.

The political parties also demanded for the total number of PVC collected before the election and the removal of former corps member and federal civil servants from the list of INEC adhoc staff.

The refusal of the commission to shift ground on the issue of the tampering with the 2015 accreditation method and the introduction of simultaneous accreditation and voting for 2019 election led to the commotion that engulfed the meeting.

Earlier, a move to disrupt the meeting by pro Buhari chairmen who wanted to stop IPAC chairman, Peter Ameh from speaking, were rebuffed.

A statement from IPAC Spokesperson, Ikenga Imo Ugochinyere, said the meeting has hit a stalemate as the INEC chairman has refused to shift ground on the issue of the accreditation and voting process with tension rising and some chairmen threatening to stage a walk out.

Ugochinyere in the statement said, IPAC also made some demands which it believes will guarantee free and fair elections.

According to him, “In view of the refusal by President Buhari to sign the 2018 Amended Electoral Act which would have helped to strengthen the 2019 election (meaning we will be using the same laws used in 2015), the following minimum standard and safe guards becomes paramount to be adopted by INEC to help make 2019 free/fair:

B: The advantages of the retention of the 2015 accreditation method is that it will reduce the physical manipulation of the results at the pulling unit level as all voters who have been accredited will all be waiting for the separate commencement of voting which is better than the simultaneous accreditation/voting which leaves a few people at the pulling unit thereby making it easy for manipulation and security intimidation

C: NEW INTRODUCTION: Provide Separate forms for recording and announcing of total number of accredited voters by 12/1pm close of accreditations before voting starts. This addition is to secure the credibility of electoral process by ensuring that once accreditation ends by 12/1pm the electoral staff announces the total accredited votes, enters it into a form and all-party agents sign and copies are issued out to the party agents who will all sign before the voting process starts. This once is done secures the electoral foundation and blocks tampering of result and snatching of materials because the total accredited votes evidence is already issued out and no manipulation can alter that as it is already in possession of the agents even before voting starts, the worse that can happen is that even if anybody wants to rig, his rigging plans will be limited inside the already known total number of accredited votes.

D: VIOLATION OF ECOWAS PROTOCOL BY INEC/NON-CONSULTATION OF STAKEHOLDERS.

The move to tamper with the National guideline and procedure for accreditation as used in 2015 to a new one few weeks to election violates ARTICLE 2 AND 3 OF THE ECOWAS PROTOCOL ON DEMOCRACY AND GOOD GOVERNANCE which Nigeria is a signatory to and was also one of the reasons given by the Presidency for President Buhari not singing the amended Electoral Act. Article 2 of the protocol forbids Amendment to Electoral rules and guideline 6 months to election without consent of majority of political actors. Article 3 demands that the Electoral body must be neutral, have confidence of the political parties/actors and consult political parties/actors to arrive at guidelines/structures and bodies for the election. Note here that Political parties who are the major actors in the electoral process have not been consulted on any plan to change the method for accreditation. Also for the purposes of National election, INEC have not issued any National election guideline within the 6 months’ time limit to change the method for accreditation which means that the last known National method of accreditation for election is the 2015 method of separate period for accreditation and voting and not the simultaneous accredit/vote method that INEC is trying to experiment with at some failed bye elections and for the first time in a National election.

E: FINANCIAL IMPLICATION. This form of accreditation is not of much burden as INEC already have the format of the EC8A/EC8VP which can be tinkered with to reflect the demands but even if they don’t want, they can still design a single page document which printing and minting companies can roll out in less than 10 days. INEC have surplus funds which would have been deployed into the e-voting/collation procedure assuming the electoral act amendment was signed and now the law was not signed all the expenses that would have been carried out based on that law will no longer be done thereby saving some funds.

All the budget left over from ballot papers printing because INEC will be working on total pvc collected and not on the total registered voters as not all registered voters can vote unless you have pvc. There are many subheads and miscellaneous provision funds in the INEC budget that can get the form printed. Above all, separate forms or not for entering accreditation, availability of money to print a separate form or not etc, a reversal to 2015 accredit separate and vote separate is non-negotiable and the only way to reduce polling units vote manipulation and safeguard the polling units from been overrun by thugs or compromised security agents and does not require any money to do so.

In order to reduce the possibility of desperate politicians conniving with compromised INEC staff to hijack uncollected PVC and give to their supporters to come and vote which is now possible with the re-introduction of the incidence form inside the voters register which allows all PVC holders to vote once their name is in the register even when the card reader cannot recognise their finger print and also to avoid falsification of results which will exceed the total number of PVC collected in a particular area. This makes it imperative that INEC must agree on a date with political parties to release the final list of PVC collected and not collected on polling unit basis to help the parties have a total summary of the votes that is for the election since voting is on pvc possession alone, so that we know the number of people expected to vote which is not the same with the total number of registered voters. Also, a date for the close of the collection of the PVC must also be agreed and announced to Nigerians after which INEC issues the requested PVC collection data to the political parties.

This window will be used to bring in people with allegiance to some vested political interests. All measures to monitor the manipulation of the selection process must be put in place to avoid the Rivers State past scenario where card carrying members of a Political party were deployed as INEC Ad Hoc Staffs

Those eligible to apply include:

NB: original of documents are to be sighted at the point of submission of application.

All applications should be addressed to the ELECTORAL OFFICER & submitted to INEC office in your locality not later than 14th January 2019.

Logistics head is from north and collation committee chaired by Amina Zakari is from North plus the INEC Chair and Police IGP which is doing policing for the election all from the North.

The transport committee has an almost 100 percent northern membership because the heads of the security agencies which have membership are from the North. Note also the head of the para military agencies that are members of the comittee is Dambazzau, the Interior Minister who is also the Head of APC Presidential campaign security committee.

No membership or representative of the Political Parties platform/IPAC is in these committees.

Also we demand for the rejig of the two main committees headed by northerners especially the Amina Zakari committee which is supposed to be headed by the commissioner in charge of Operation Mr. Ibeanu because collation issues and its venue is operation issue