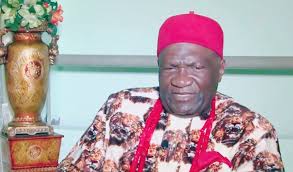 The Ohanaeze Ndigbo, the apex socio-cultural group of Ndigbo has said that the recent appointment and posting of police commissioners across the country has further exposed the current government as deliberately determined to marginalize Ndigbo.

The Police Service Commission (PSC) recently announced the posting of police commissioners to all the 36 states of the federation and Abuja. The list has only two Igbo police officers as state commissioners of police.

President General of Ohanaeze Ndigbo Worldwide, Chief Nnia Nwodo, in a statement made available to journalists said the appointment and posting of the police commissioners has once more vindicated the position of Ohanaeze Ndigbo Worldwide on what he described as the mindless victimisation and marginalization of Ndigbo by the President Muhammadu Buhari-led Federal Government.

The statement reads: “A cursory look at the list of the newly-posted Commissioners of Police to States throughout the country indicates the obvious lopsidedness in both the number of Ndigbo affected and their states of posting.

“The whole of the seven Igbo-speaking states in the country has only two Commissioners of Police while some single states have two or more and some geopolitical zones more than six or seven.

“President Buhari came on campaign to Anambra State and insulted Ndigbo by saying that his postings were based on merit and that is why the South East zone is completely absent in the security apparatchiks of the country.

“In other words, no Igbo man or woman is intelligent or brilliant enough or has his confidence to head any of the security apparatus of Nigeria, and to buttress his point, only two Igbo officers are “meritorious” to be appointed Commissioners of Police in charge of States.

“To further rub it in, the only two are posted to the most hazardous war-torn areas of the north –Zamfara and Borno States.

“It is worthy to note that Ndigbo have always formed the majority of soldiers posted to these war zones and have paid their dues including producing a worthy General Officer Commanding troops and who distinguished himself there.

“What have Ndigbo done to this administration to deserve this ill-treatment? The Nigeria/Biafra War ended nearly 50 years ago. Why the continued marginalization?

“This kind of discrimination should not be lost on Ndigbo, especially at this period of reckoning and payback. It would be remembered that two brilliant Deputy Inspectors General of Police were recently retired by this administration to pave way for the appointment of the current Acting Inspector General of Police, Mohammed Adamu.

“If Mr President loves Ndigbo as he is canvassing, why didn’t he try to balance the glaring absence of Ndigbo at a table where the security of this country is decided?