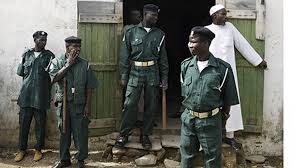 The Commander-General of Kano Hisbah, Nabahani Usman, has threatened to arrest adults seen eating in public from Monday when Ramadan commence. “We do this kind of operation yearly and we will continue it this year, said Usman.  The aim is to get every Muslim to respect the month of Ramadan. Even if a doctor says you should not fast, that does not mean you should eat in public while others are fasting. He said his men will begin to arrest adults who are seen eating in public. Usman said arrested persons would only be released if they show medical report that exempts from fasting, or suffer from Ulcer. “So any Muslim that we apprehend eating outside, our men will arrest and bring the person to our office unless he can show proof that a doctor asked him not to fast.”

Muslims in Nigeria are to begin fasting in observance of the holy month of Ramadan, which began on May 5 this year.