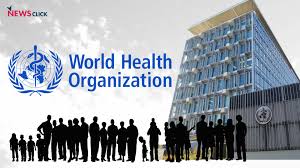 said that, globally, women live longer than men; and that the difference in the male-female lifespan is particularly stark in high-income countries.
This is contained in the WHO yearly analysis of global health statistics titled, World Health Statistics Overview 2019.
The study also sheds light on men’s inbuilt “biological frailty” and poor immune systems, which are said to be responsible for the miscarriage of male foetuses and death of male children in their first year of life.
The report, led by Dr. Richard Cibulskis, notes that the average life expectancy globally has increased by five-and-a-half years since the turn of the century, and that women outlive men everywhere.
“Whether it’s homicide, road accidents, suicide, cardiovascular disease – time and time again, men are doing worse than women,” Cibulskis notes.
Explaining the differences in life expectancy, WHO says a baby boy born in Africa in 2016 could expect to live to age 60, while a baby girl could expect to live to 63.
“Healthy life expectancy at birth is 53 for boys and 55 for girls,” the global body adds; noting, “But in Europe, the difference between boys and girls is much greater, as a boy born in 2016 could expect to live to the age of 74 and a girl to the age of 81.”
The reports says that healthy life expectancy is 66 years for boys and 71 for girls in wealthy countries.
Cibulskis laments that in general, men die from most things more than women, saying this is true in low and high income countries.
“But in low income countries, women have a greater risk of dying in childbirth; so, the maternal mortality rates skew the figures,” he said.
The reasons for the differences between men and women are three-fold, Cibulskis said, noting that men have an inbuilt “biological frailty” and poor immune systems which explain why more male foetuses are miscarried and why more boys die in their first year of life.
The lead author however notes that the main differences are due to environmental factors, as men are more likely to engage in risky behaviour such as smoking and alcohol consumption, and the fact that men go to the doctor less often than women.
In his discussion of the report, Peter Baker, director of Global Action on Men’s Health, said health services needed to be better designed around men.
“You could take the view that men are a bunch of idiots bent on self destruction but that is not true. Most men in the world don’t smoke or drink at dangerously high levels,” Baker argued.
Meanwhile, apart from the average increase from 66.5 years, to 72 years overall, the report’s findings also show that “healthy” life expectancy – the number of years individuals live in full health – increased from 58.5 years in 2000, to 63.3 years in 2016.
Differing attitudes to healthcare between men and women help to account for the discrepancy in life expectancy between the sexes, the report suggests.
In countries with generalized HIV epidemics, for example, men “are less likely than women to take an HIV test, less likely to access antiretroviral therapy and more likely to die of AIDS-related illnesses than women”, the study finds.
The same principle applies for tuberculosis sufferers, with male patients less likely to seek care than women.
The report also finds that of the 40 leading causes of death, 33 of them contribute more significantly to reduced life expectancy in men than in women.