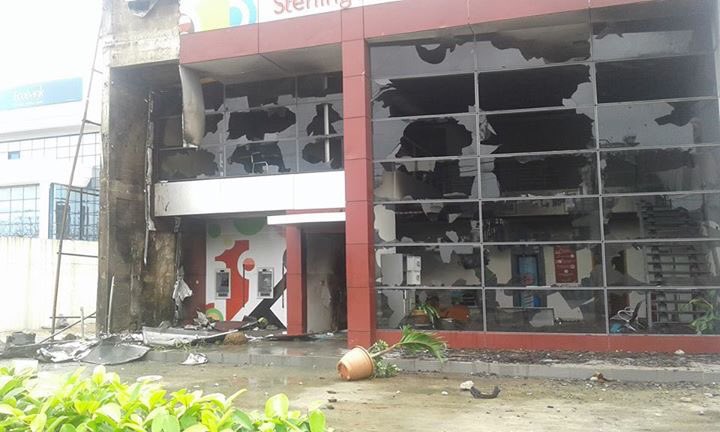 An angry mob of tanker drivers pursuing an armed mobile policeman allegedly set Sterling Bank branch on Creek Road Lagos ablaze Wednesday morning. The policeman was said to be fleeing from the mob after allegedly shooting a tanker driver. Eyewitnesses said he ran into the premises of Sterling Bank to escape being lynched. Security operatives attached to the bank were said to have disarmed and arrested the fleeing mobile policeman but did not hand him over to the irate mob.

The mob got upset and attacked the bank with the intention of unleashing mayhem on staff and customers. The branch’s reception area was vandalized and set ablaze according to an official of the bank.

Sources said trouble started after a mobile police officer shot dead a truck driver for indiscriminately parking in front of a branch of Diamond Bank on Creek Road.

Another eyewitness, who was at the area during the mayhem said: “A trailer driver was shot on creek road by a police officer earlier this morning. The policeman ran into Sterling Bank seeking refuge with the mobile unit attached to the bank. The angry mob then set fire to a car within Sterling’s premises which slightly affected the building.

“It’s the Sterling Bank that was torched really, we helped in putting out the fire as the fire services could not gain access to Apapa and hoodlums blocked the Port Authority fire crew from gaining access too.”

Chief Marketing Officer of Sterling Bank, Henry Bassey, who confirmed the incident in a statement said the security operatives attached to the branch prevented the mob from entering the branch while evacuating staff and customers before the arrival of police reinforcement. He further stated that the branch has been temporarily shut down.

“We wish to inform all our customers that normal services will continue at nearby branches and through all our electronic channels,” he said, adding that Sterling Bank is working with security agencies to resolve the issue.