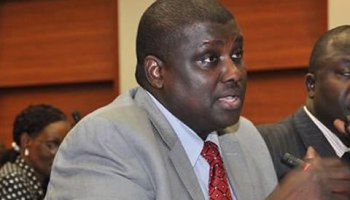 In a memo to the Head of the Civil Service of the Federation, the President equally demanded a full report of the circumstances of Maina’s recall and posting to the Ministry of Interior.

The report is to be submitted to the office of the Chief of Staff to the President, Mallam Abba Kyari, before the end of work today, Monday, October 23, 2017.

Mr Abdullahi Abdulrasheed Maina was sacked by President Jonathan administration for allegedly pilfering N2 billion Pension monies and was recommended for prosecution by EFCC, but fled to Dubai on a self imposed exile.

“Dark complexioned Maina is allegedly complicit in the over N 2 billion Pensions Biometric Scam in the office of the Head of Civil Service of the Federation. He remains at large, after charges were filed against his accomplices,” the EFCC stated on its website.

However, Mr. Abduraman Dambazau, the minister of interior in a statement by his press secretary, Ehisienmen Osaigbovo, stressed that Mr. Maina “was posted few days ago to the Ministry of Interior by the Office of the Head of Service on an Acting capacity to fill a vacancy created following the retirement of the Director heading the Human Resources Department in the Ministry”.

The minister pointed out that Mr. Maina’s recall was done by the Office of the Head of Service of the Federation and the Federal Civil Service Commission.

He noted that the two bodies are responsible for “issues relating to Discipline, Employment, Re-engagement, Posting, Promotion and Retirements of Federal Civil Servants.”

Mrs Winifred Oyo-Ita, Head of Civil Service of the Federation (HCSF) has debunked Mr. Dambazu`s assertion alleging that her office approved the re-instatement of Alhaji Abdulrasheed Maina and posted him to the Ministry of Interior.

“Consequently, the purported re-instatement and posting by the Office of the Head of the Civil Service of the Federation is totally erroneous and misleading.”

Fayose: Buhari’s sack of Maina an afterthought; calls for his arrest, prosecution

Nontheless, Ekiti State Governor, Mr Ayodele Fayose has described President Muhammadu Buhari’s directive for the immediate disengagement of former Chairman of the Presidential Task Force on Pension Reforms, Mr Abdullahi Maina, as an afterthought, saying; “The President only acted to save his face from the global embarrassment caused him by the outcry of Nigerians on the news of Maina’s reinstatement.”

Governor Fayose demanded for the immediate arrest and trial of Maina as well as sack of all those who perpetrated his reinstatement, which he described as fraudulent and shameful.

In a statement signed by his Special Assistant on Public Communications and New Media, Lere Olayinka, Governor Fayose, who likened Buhari’s anti-corruption fight to a situation where “Satan is calling Judas Iscariot a sinner,” reminded Nigerians that he said before now that the kind of corruption that will be witnessed in President Buhari’s government will be unprecedented and that he had been vindicated.

The governor described the government of President Buhari as corruption personified, noting that; “If Maina, who was declared wanted for corrupt practices by the International Police Organisation, (INTERPOL) after he was dismissed from office by the Civil Service Commission in 2013 for allegedly committing N2.1 Billion pension fraud while in office, could be secretly reinstated and even promoted without writing the required civil service promotion examination, no one should be in doubt any longer that Buhari is not fighting any corruption.”

Governor Fayose, who described President Buhari and his men as defenders and protectors of corruption, said; “Even the former Chairman of EFCC, Ibrahim Lamorde, who was accused of corruption by the Senate, removed from office unceremoniously and declared wanted is now the Commissioner of Police in charge of the Special Fraud Unit (SFU), Ikoyi, Lagos.

He said; “When the Minister of State for Petroleum Resources Ibe Kachikwu raised allegation of award of $25 billion contracts without following due process against the Group Managing Director (GMD) of the Nigerian National Petroleum Corporation (NNPC); Dr. Maikanti Baru, the Presidency was the one that defended him (Baru).

“Also, President Buhari has refused to act on the report of the committee that investigated the $43 million discovered in an apartment at Osbourne Towers, Ikoyi, Lagos, despite that Nigerians have been asking him to act on it.

“Even the Acting Chairman of EFCC, Ibrahim Magu was indicted of corruption by the Department of State Service (DSS) and all that was done by President Buhari was to ask the Attorney General of the Federation and Minister of Justice, Abubakar Malami (SAN), to investigate the DSS report. Up till today, nothing has been heard about it and Magu, despite his rejection by the Senate, Magu is still acting as the EFCC chairman.

“It was also under this government of Buhari that Ahmed Gambo Saleh; the Supreme Court Registrar was indicted and put on trial for alleged over N2 billion fraud. The case against Gambo Saleh was withdrawn almost immediately, and he has been appointed the Secretary of the National Judicial Council (NJC). Not only that, he was made the Secretary of the Corruption and Financial Crime Cases Trial Monitoring Committee, headed by Retired Justice Isa Ayo Salami .

“Like I have said several times, as far as President Buhari is concerned, corruption involving his men is family affair, and one won’t be surprised if Maina is rewarded with bigger office very soon, just like others before him.”