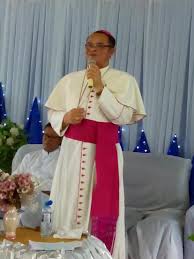 A Catholic Priest serving in Abia State whose name is yet-to-be ascertained has miraculously escaped from gunmen believed to be kidnappers who abducted him.
Though information about the incident is sketchy, our reporter gathered that the Catholic Priest was trailed and kidnapped by the gunmen near his Parish.
Information has it that the Rev. Father was coming to perform early morning mass at the parish in one of the villages in Osisioma Local Government Area of the state, about 15mins drive from the heart of the commercial city of Aba, but never knew that he was being trailed.
Sources within the parish disclosed that two male mass servants that were with the Priest were pushed away from the car by the gunmen who drove him away to an unknown destination.
The sources stated that the incident left early callers to the church in tears as they disclosed that the priest was barely new, an action they noted would paint bad picture of the parish.
They also lamented the development could scare away the priest or others that the church may wish to deploy to the area.
Information gathered by our reporter has it that since soldiers posted at Umu Imo by Aro Ngwa junction of the Enugu-Aba-Port Harcourt Expressway left, criminal activities have been on the increase around the area.
Our reporter gathered that the Rev. Father had attempted to force himself out of the car when he noticed that they were on the expressway but was resisted by the gang members who were at the back of the car.
His restlessness in the car, which had begun to attract the attention of other road users, reportedly forced the gunmen to allow him jump out of the car while they drove off with the victim’s car.
The victim’s car was later recovered by policemen from Osisioma Police Division from where the gunmen abandoned it.
Our reporter could not reach the Abia State Police State Command Public Relations Officer for comments at the time of filing this report.
The Rev. Father could not be reached as well for comments.