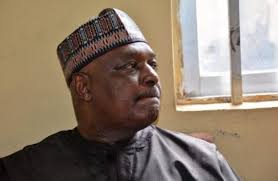 Rev. Jolly Nyame, ex-governor of Taraba jailed for 28 years for theft of public funds and other crimes

Jolly Nyame, a former governor of Taraba State and clergyman, has been sentenced to a total of 28 years in prison, 14 years of which was for criminal breach of trust.

An outraged Justice Adebukola Banjoko of the Federal High Court, while handing out the sentence, lashed out: “There’s no moral justification for the level of outright theft, and the Court must therefore, impose a statement, hopefully as a deterrent to other public officers, who may be similarly inclined”

Nyame, whose trial began on July 13, 2007 before Justice Adebukola Banjoko of the Federal Capital Territory, FCT High Court, Guru, was charged with 41 counts by the Economic and Financial Crimes Commission, EFCC, for criminal misappropriation, diversion of public funds, and breach of public trust.

In a ruling which lasted more than 4 hours, Justice Banjoko found Nyame guilty of 16 counts, bordering on criminal breach of public trust.

Justice Banjoko, noted that Nyame, a clergyman, as governor of Taraba, breached the trust reposed in him by the indigenes of the state, when he misappropriated N250 million which he approved purportedly for the purchase of stationery for the state.

“From the totality of facts before the court, Nyame approved N250 million for purchase of stationery, but is found to have no intention to fulfil the purpose,” the trial judge held.

In the course of the trial, the prosecution called 14 witnesses and presented documentary evidence, which among other things revealed that the N250 million was shared and never utilised for the purpose for which it was approved. A total of N180 million was diverted to the bank account of Salman Global Ventures Limited, which provided no services for the state.

The judge further added that: “the audacity of the defendant to divert N180 million from the N250 to the company, shows that he had more than a casual interest and so can’t hide behind a screen”.

Nyame was also found guilty of “misappropriation and misapplication of N165 million with dishonest intention”, and the misappropriation of N24,300,000 purportedly approved for “purchase of grains”.

Justice Banjoko held that Nyame was “guilty of criminal breach of trust beyond reasonable doubt”, while also finding him guilty of the offence of gratification as stated in count four of the charge.

The EFCC had accused him of accepting a gratification of N80 million from Abubakar Suleiman of Alusab International (Nig) Ltd through Salman Global Ventures “as a reward for the award of contract by the Taraba State Government to USAB International (Nig) Ltd”, an offence punishable under Section 115 of the Penal Code Act 1990.

In the allocution of the defence, which was made by Olalekan Ojo, he urged the court to consider that Nyame was a first-time offender, and a family man who had dependents to cater for.

“He served the people of Taraba State for eight years, and through him the lot of the people in the state was bettered,” he said.

Ojo urged the court to “take into consideration the selfless service of the convict, who has no criminal record of any sort and is still less than 60”.

In its counter-argument, prosecution counsel, O.A. Atolagbe, urged the court to take into cognisance the aggravating effect the action and inaction of Nyame had on the people of the state.

Citing Section 416 2 (a) (d) (e) and (f) of the Administration of Criminal Justice Act 2015, he urged the court to consider the aggravating factors on the state. He also pointed the attention of the court to the FCT Courts Practice Direction 2016, stressing that Nyame, played a leadership role in the commission of the offence.

“He abused his position of trust and caused severe harm to the society and economy of the state, and so the effect of the offence must be put into consideration,” he argued, adding that, “claim of selfless service is far from the truth”.

After listening to the arguments of both counsel, Justice Banjoko, gave her sentencing and noted that despite the claim of being a first-time offender, a family man, and his service, “I am morally outraged with the facts of this case”.

“There’s no moral justification for the level of outright theft, and the Court must therefore, impose a statement, hopefully as a deterrent to other public officers, who may be similarly inclined”.