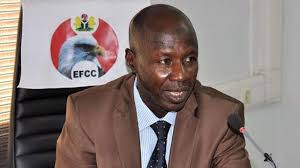 The Economic and Financial Crimes Commission (EFCC) said more suspects would be uncovered as investigation into the 80 Nigerians recently indicted for internet-related crimes by the US Federal Bureau of Investigations (FBI) continues.

Mr Friday Elebo, the Ibadan Zonal Head of EFCC, told newsmen yesterday in Ibadan that the commission had commenced investigations on the Nigerians indicted by FBI.

He said: “I want to assure you that by the time we conclude our investigations, we will unravel bigger suspects because the figure currently released by the FBI is like one percent of the cycle of persons involved in the cybercrime network.

“Just yesterday (Tuesday), we arrested a banker who was involved in converting foreign currencies to Naira at a local bank in Nigeria. He is currently helping the commission with information on our investigation.”

Ebelo said that the commission was in collaboration with some international agencies with similar mandates, especially FBI, to curb internet crimes and illicit funds transfer.

According to him, as a responsive organisation, the EFCC will do everything within its constitutional powers to ensure that the interests of hardworking and law-abiding Nigerians are protected.

“We will ensure that Nigerians are not denied the fruits of their labour by the recalcitrant few.

“We will work assiduously to ensure that those who engage in acts capable of tarnishing the good image of the country are prosecuted,” he said.

Ebelo said that Nigerians were known to be creative, hardworking and intelligent, saying that these had been effectively proven by records of many groundbreaking achievements attributed to them across the world.

“We cannot pretend to be oblivious of the nagging impact of illicit activities of a few who have chosen to be black sheep within the fold,’’ he said.

The EFCC chief said that the zonal office, from January till date, had arrested 263 suspected internet fraudsters out of whom 111 were convicted and sentenced to various jail terms.

“The zone has also recovered huge sums of money in local and foreign currencies. The currencies are 52,702 US dollars, 2,400 Euro, 400 Canadian dollars and 60 pounds.

“We also got the nod of the court for some of them to forfeit valuable items established to have been proceeds of internet-related crimes.

“These include landed properties, vehicles, laptops, phones and many others,” he said.

He also said a suspected internet fraud kingpin was arrested during a recent operation in Ado-Ekiti.

“This suspect, according to our investigation, works with other cyber criminals abroad in a highly sophisticated web of conspiracy designed to illegally access accounts and defraud individuals as well as organisations.

“We were able to establish a number of illicit transactions through his Nigerian bank account amounting to over N223 million.

“He serves as conduit pipe through which proceeds of crime reach members of the syndicate. His cuts in the deals totaled over N75 million.