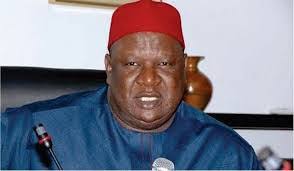 The Economic and Financial Crimes Commission (EFCC) has released a former Secretary to the Government of the Federation, Anyim Pius Anyim.

Anyim regained freedom less than two days after the anti-graft agency announced that it has secured a court warrant to detain him for 30 days.

However, the former SGF has been instructed to report to the Commission every two weeks after meeting his bail conditions.

Anyim, who is a former Senate President, is being investigated for allegedly collecting N520million from a former National Security Adviser, Col. Sambo Dasuki and awarding contracts worth N13billion to companies he had interests in.

He is the most senior official under the administration of former President Goodluck Jonathan to be arrested by the EFCC.

It would be recalled that Anyim had also been summoned by the House of Representatives over his role in the controversial centenary city project of the Jonathan administration.