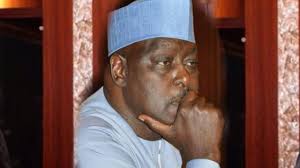 An FCT High Court Maitama on Tuesday fixed Oct. 16 for ruling on the admissibility of Economic and Financial Crimes Commission (EFCC) documents in the trial of Babachair Lawal, former Secretary to the Government of the Federation (SGF).

Justice Jude Okeke, fixed the date after all counsel in the matter argued for and against the admissibility of EFCC’s documents.

He also fixed Oct. 17 for continuation of the prosecution‘s case.

The former SGF and his brother, Hamidu David Lawal, a director of Rholavision Engineering Limited; an employee of the company, Sulaiman Abubakar and the Managing Director of Josmon Technologies Limited, Apeh John Monday were charged by EFCC.

They are charged with 10 counts of conspiracy and fraud brought before the court by the anti-corruption commission.

They and two companies, Rholavision Engineering Limited and Josmon Technologies Limited are being prosecuted by the Economic and Financial Crimes Commission (EFCC).

EFCC accused Babachir Lawal of illegally benefiting from the approval of N544,119,925.36 for the removal of invasive plant species and simplified irrigation.

The anti-graft agency alleged that Lawal being the SGF and Hamidu Lawal, director of Rholavision Engineering Limited and Abubakar, staff about March 7, 2016 at Abuja conspired to commit the offences.

It alleged that the defendants fraudulently acquired a property, contrary to Section 26 (1) (c) of the Corrupt Practices and Other Related Offences Act, 2000.

It also alleged that the former SGF knowingly held indirectly a private interest in the consultancy contract awarded to Rholavision Engineering Limited for the removal of invasive plant species and simplified irrigation to the tune of N7 million and N6.4 million.

EFCC claimed that it was done through the Presidential Initiative for North East (PINE).

It further alleged that on March 4 and Aug. 22, 2016 contract for removing evasive grass worth N272.5 million and N258.1 million respectively were awarded to Josmon Technologies Limited but was executed by Rholavision.

The offences, according to EFCC, were contrary to Section 12 of the Corrupt Practices and Other Related Offences Act, 2000.

The six defendants, however, pleaded not guilty to the charge preferred against them.

The prosecuting counsel, Mr Ufon Uket, sought to tender some documents through her and was objected by all the defendants counsel he was later granted a prayer of adjournment to enable him respond to the objections.

Okeke said for sake of fair hearing he was moved to grant the prayer of adjournment by the prosecution.

Responding to the objections by all the defendants ‘ counsel, Uket told the court that the documents tended to tender were a letter of request for forensic extraction of evidence from the iPhone , this according to him was not objected.

Uket said the objections by the defendants was on the disc and its print out also, the digital forensic report.

He said that PW2 was chosen to testify in court because she was the digital forensic expert who carried out the extraction of the information from the iPhone.

Uket added that PW2 explained the equipment and devices used, there proficiency and reliability in extracting the i-messages from the iPhone.

He submitted that the witness having orally laid the required conditions as in section 84 (2) for the admissibility of the disc and it’s print out, the certification of the print out is not required again.

Uket further submitted that section 84 of the Evidence Act provides two methods either by oral evidence 84 (2) or certificate of authentication 84 (4) and the report was prepared by the witness.

He said that the digital report does not require certification because it was a primary evidence in it’s original form and can be admitted.

Uket submitted that section 84 (2) of the Act did not specify or classify electronic evidence as secondary evidence which needed certification.

He therefore urged the court to ignore the objections of the defendants and admit the documents in evidence because the document tended to tender was through the witness and not from the bar.

Reacting, Mr Akin Olujimi, counsel for Lawal submitted that 379 (3) of the Administration of Criminal Justice Act provides that all documents from the prosecution should be served on the defendants.

Olujimi submitted that there was no evidence to show that what was in the print out was the same thing as in the disc.

“How do I know what was in the disc, if I did not play it” he submitted.

He further submitted that the report of a digital information is governed by section 102 of the Evidence Act not section 84 of the same Act, the report has no life of its own but tied to the device it was generated from.

Olujimi therefore urged the court to uphold their objections and not admit the documents in evidence.

Mr Sunday Amen, SAN, for the second defendant aligned with the submissions of Olujimi but added that from the evidence of PW2 the iPhone was in her custody as a public officer.

He submitted that by the provision of section 102 of the Act, the iPhone and its report are public document generated for public use.

Ameh said that the print out was a secondary document, which needed to be certified before it can be admitted.

Other defendants counsel aligned with the submissions of both Olujimi and Ameh.