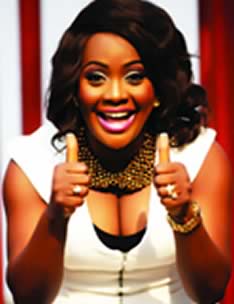 Multiple award-winning entertainer, Helen Paul, has celebrated her 17 years on stage with the release of her anticipated play, ‘Live Burial’. The event which was held at the University of Lagos Guest House, was attended by Prof Olumuyiwa Adebanjo-Falae, (Dean, Faculty of Arts, UNILAG), Barrister Femi Bamisile, Chief Charles Nwoji and Dr. Otun Rasheed among others. The comedienne seized the opportunity to officially unveil the members of her drama troupe.

Prof Adebanjo-Falae, who was the chief launcher of the day with his wife, described Helen Paul as a special breed and congratulated her husband for having a wife like her.

“She is also lucky to have a gentleman like him too because without his support and sacrifice, she can’t be where she is,” the Professor said.

Helen Paul recently toured some Nigerian universities with her crew to present ‘Live Burial,’ her first work as a playwright.

The tour started from the University of Lagos, before moving to Obafemi Awolowo University and Redeemers University, where the drama received accolades from veterans like Olu Jacobs, Joke Silva and Dr. Ahmed Yerima.

The second phase of the tour is scheduled to kick-off later in the year. “Interestingly, we have actually received messages from some international schools requesting that we bring ‘Live Burial’ to their respective institutions. But we would be starting from Cameroon soon,” she stated.