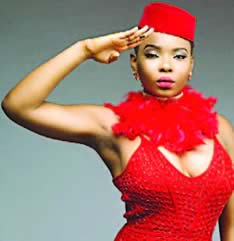 She was officially unveiled recently at a ceremony held in Lagos.

Yemi Alade said, “With over six years as the biggest African-inspired fashion event in Europe and one of the most anticipated fashion shows in Nigeria, AFWN and AFWL have become world-class brands.”

Alade, who is also a jewellery designer, also hinted of her plans to work on a fashion project with some of the emerging designers which would be launched later in the year.

On her part, the AFWN and AFWL founder, Miss Ronke Ademiluyi said, “This year, we chose someone who embodies the true African woman. A strong, intellectual and musically inclined woman; her music reflects what’s good, what’s great and what’s best about the motherland. We couldn’t have chosen anyone more suitable to be our brand ambassador.”