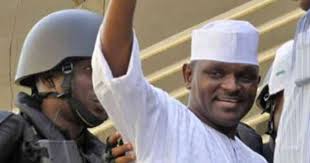 Hamza Al-Mustapha, former Chief Security Officer (CSO) to late Head of State, General Sani Abacha, says he will join the presidential race if prevailed upon by Nigerians to do so.

Al-Mustapha, a retired major, gave the indication in Kaduna in an interview shortly after a meeting with United Christian Leaders Eagle Eye Forum which backed him to join the 2019 presidential race.

“I am not going to announce myself contesting for a presidential seat, but if people say so that, is the wishes of the people.

”I am not a power tasty person, if I am, I would have lost my personality long before now, but when people gather to speak and the decision is by them, then it is a call to serve,” he said.

According to him, his focus is the protection of the right of Nigerians as provided under the law.

He also spoke on the security situation in the country and called for the reintroduction of toll gates, which he described as an effective buffer of uncovering illegal weapons and movement of criminals.

He also called for the overhaul of the Police Act to strengthen policing at the local level in the country and particularly said local government councils must be allowed to work effectively, so as to tackle local challenges including security.

He described the efforts of the EFCC in fighting corruption “as a small monkey given a thread to arrest an elephant, but abandoned it and is busy destroying the animal kingdom.

“It requires a bigger body that has the capacity of intelligence that can reach out to the international community to get our stolen funds stashed abroad and equally prosecute rather than relying on the regular Police to do that.”

On the Abacha loot, the former CSO to the late Head of State said, he knew nothing about it.

“The fact that some of Nigerian leaders were corrupt does not mean that everyone that serve in government is a thief. Some of us can stand and challenge any institution or individual any day any time.

“Stealing is not what you require, but its service to the nation that matters. Any money that you steal not to render service to the people makes the owner an illiterate, vision less storekeeper.”

NAN reports that Chairman of the United Christian Leaders Eagle Eye Forum, Aminchi Habu, said the forum, after critical analysis and observations has endorsed Mr Al-Mustapha to contest in the upcoming presidential election in 2019.

He said the forum will stand with Mr Al-Mustapha once he makes up his mind to run for the presidency because of his integrity.