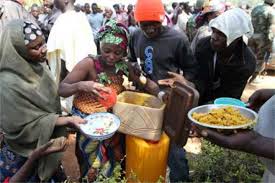 Internally displaced persons (IDPs) in Borno state are reportedly being forced back home to ruins, without guarantee of their safety.
According to Reuters, the move is to show progress in the war against Boko Haram insurgency as the 2019 elections approach.
The IDPs are reportedly being told that they must return home if they wish to continue to receive help from the federal government.
In June, some 2,000 IDPs living in Bakassi camp in Maiduguri, Borno state capital, were reportedly asked to return to a town called Guzamala.
According to the report, the government and officials of the Independent National Electoral Commission (INEC) have been meeting to discuss how to expedite the return of the IDPs to enable them register to vote.
“They said, ‘If you refuse to return, you are on your own, the government will not help you anymore’,” one of the returnees identified as Hassan said.
Apart from the communities being unsafe, the IDPs also complained that they cannot earn a living in the area due to the activities of the insurgents.
“We were deceived,” an IDP identified as Modu was quoted as saying. “There is nothing in Guzamala other than suffering.”
Reuters described the area as a “wasteland,” adding that most of the structures there are still shattered.
“There, some food and supplies – enough to feed a family of 10 for a day, according to one man – were distributed,” the report added.
“Since then, the returnees have been left for weeks at a time to fend for themselves. Some soldiers took pity on them and handed over their own water rations.”
The news agency said no government official responded to an enquiry on the issue.