Our analysis of Julius Berger’s recent financial reports shows that Nigeria’s economic recession had a degenerating effect on the company, and despite all efforts to curtail costs, was not quite able to turn out as much profit in 2015 as it did in 2014. Profitability ratios for the period declined, as did investor compensation. This company however made it a point to reward shareholders with a dividend, and although this was a little lower than what they got in 2014, it had to dip into reserves to achieve this.

We are however of the opinion that shareholders, for the first time in years, might not receive dividend income from their investment in Julius Berger come year end 2016. Reeling from the effects of the recession which culminated to less jobs/contracts for Julius Berger, even running a leaner operation (i.e. downsizing, cutting advertising costs) did not help the company in 2016.

As at September 2016, it already had a huge post tax loss, and three months to the end of the 2016 FY is too close to make a sudden turnaround to profitability. So, we predict that the company will post a loss, and investors will receive no dividend income.

We also predict that the company will implement even stricter cost reduction methods. More employees might lose their jobs as a result of further downsizing, and some contractors to Julius Berger might be in danger of losing their contracts.

Julius Berger did not have a very good year in 2015 operation-wise, as was the case with many other road construction and building material companies in Nigeria.

The company continued to make less revenue from operations (like it did in 2014), and turnover for the year declined by as much as 32 per cent to a three-year-low of N133.8 billion. This is as a result of the downward review of capital expenditure in the public and private sectors.

The company however made intense efforts to run a leaner operation, cutting cost of sales as much as it could. Despite this, pre-tax profit declined by 50 per cent to N6.5 billion while profit after tax dipped to a mere N1.8 billion, signifying a 77.8 per cent decline over the preceding year’s level.

Earnings per share, was predictably lower than that of the prior year, closing at N1.33, as compared with N6.13 in 2014. Dividend per share also moderated to N1.60 in 2015 from N2.70 in 2014. An interesting thing to note is that the dividend per share for the year was actually higher than earnings, meaning that the company dipped into reserves to pay dividend.

Not only did the company’s ability to generate revenue drop, its ability to retain whatever revenue earned also dipped. For the review year, it recorded a profit margin of 4.9 per cent, the lowest in three years. Analysis shows that for every N100 earned by the company in the course of the year, only N4.90 made it to the profit position, as compared to N6.70 and N7.60 for the two years preceding 2015.

For the 2015 financial year, Julius Berger deployed equity valued at N24.3 billion and for every N100 equity deployed, the company made an after-tax profit of N7.40, a significant decline from the profit of N31.00 made in 2014.

Perhaps because of the harsher Nigerian economic climate, the company employed fewer employees during the course of the year and its employee number decreased to 10,887 from 17,829. This represents a 38.93 per cent reduction in the workforce. Earnings per employee then improved to N12.29 million on the average, up from N11.04 million in 2014. While higher, this is not particularly indicative of employee productivity and company efficiency, because the company was operating with a much lower number of employees.

In terms of capital adequacy, Julius Berger did not impress in 2015 as well as it did in 2014, as its result for the year was lower than the preceding year’s. In fact, it had one of the lowest ratios for companies listed on the Nigerian Stock Exchange for that period. Its shareholders’ funds could finance about 16.6 per cent of its total capital, lower and worse than the 18.2 per cent ratio recorded in the preceding year.

A common feature of the manufacturing industry for the 2015 financial year is that most companies had high current ratios, having the ability to meet short-term liabilities with short-term assets. Julius Berger was not an exception, having an adequate current ratio of 1.5 times.

For the review year, the company had a distributable profit of N2.4 billion and retained less than one fifth of its profit because of its commitment to a steady and worthwhile dividend payout policy.

Sustainable growth rate for Julius Berger, which represents how quickly a company can expand using only its own sources of funding, declined drastically. Despite this fact that the growth ceiling for the company dropped noticeably, it still wasn’t able to experience any growth at all. Its actual growth rate was negative during the course of the year, indicating a decline.

Even though it has suffered devaluation over the past year and currently sold at N34.83 per share (as at 27/1/2017), we still think that the share price of Julius Berger is overvalued. Net assets per share is N15.00, less than half of the current market price and indicative of overvaluation. Also book value to market value ratio is much less than one, another clear indication of overvaluation. The company is worth less in reality than the price it is currently trading at. It is important to state that the seeming overvaluation of Julius Berger’s stock is compensated for by the goodwill the company enjoys from the consuming public and investors alike.

Still running a lean operation, Julius Berger’s 2016 third quarter results, suggest that such a strategy might no longer be effective. The company recorded a lower turnover for the period than it did the same period in 2015, but had such a huge financing cost for the period that profit was totally eroded, leaving Julius Berger with a loss of N3.3 billion, as compared to a profit of N3 billion for the corresponding period in 2015.

This after tax loss is a marked contrast to its projected result of N32 million profit for the period.

For the investor, that means there was no earnings per share for the period, rather a loss per share. It is extremely illogical to envisage that the company would be able to bounce back in the three months remaining to the end of the 2016 financial year to post a profit.

One of Julius Berger’s unique selling points is its specialization in executing complex works requiring the highest level of technical expertise and Nigeria-specific knowhow. Since its pioneer project in 1965, Julius Berger has played a pivotal role in the development of Nigeria, using state-of-the-art methods and technologies to ensure that quality and innovation are prioritized for the benefit of clients.

While we don’t expect that the 2016 FY will be a positive one for Julius Berger and its investors, there is confidence that the company has the ability to reengineer itself. It currently seems to be implementing all possible strategies to increase the size of its business and curtail costs more effectively.  The 2017 FY will be a deciding one for the company. 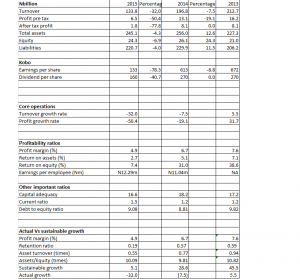