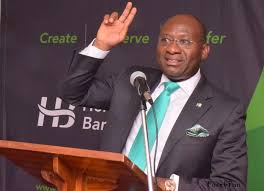 Speaking at the event, the MD/CEO of Heritage Bank, Ifie Sekibo said the bank partnered the club because, “we needed to pitch our tent where it matters, needed to be visible and to put our footprint in the sands of time.”

Sekibo, who was represented by the Regional Head, Lagos Island 2 of Heritage Bank, Abiodun Agbaje,  remarked that while the lender could not do everything at the same time, it was specifically looking at some events that are educative and have high calibre of people to deal with, adding that as a bank, they need to grow their business base with the kind of people that are at the event, who are high-calibre business people.

He said the event was one where a lot of business people gathered together in one place at the same time, stressing that Heritage Bank’s purpose is to create, preserve and transfer wealth across generations.

Also speaking, Joe Oduah, Chief Executive Officer of Resource Churchill, one of the players who contested in the competition, described the mug competition as a monthly tournament played by members only, adding that the winners are usually presented with a gift, which is a mug.

He said it is a medal play, which meant that the player with the lowest net emerged the overall winner, which entitled him to a mug and a special parking slot in the car park of the club.

Oduah, who also doubles as CEO of 3M, a safety equipment stockist and service centre and who  has been playing in the tournament for about 10 years and  won on several occasions, said generally it is an interesting tournament that brings all the amateurs players together to compete against one another.

In his contribution, Mr. Fabian Kenni, manager of the Golf Section of the Ikoyi Club 38, said the monthly mug competition is a tradition in golf worldwide and is usually done every month, either the first Saturday or the last Saturday of the month.

He said only amateur members who registered when the portal is opened are eligible to play and it is based on handicaps, which is the rating level of the players.

Each category produces two winners, that is, a winner and a runner-up, making a total of four winners every month and each of them are presented with mugs.

Mr. M. Walsh emerged the overall net winner of the October mug competition with 81- (12)=69 and was awarded a mug and also be entitled to park his car in a special slot in the car park of the park for this month.

The other winners were only awarded with mugs respectively.