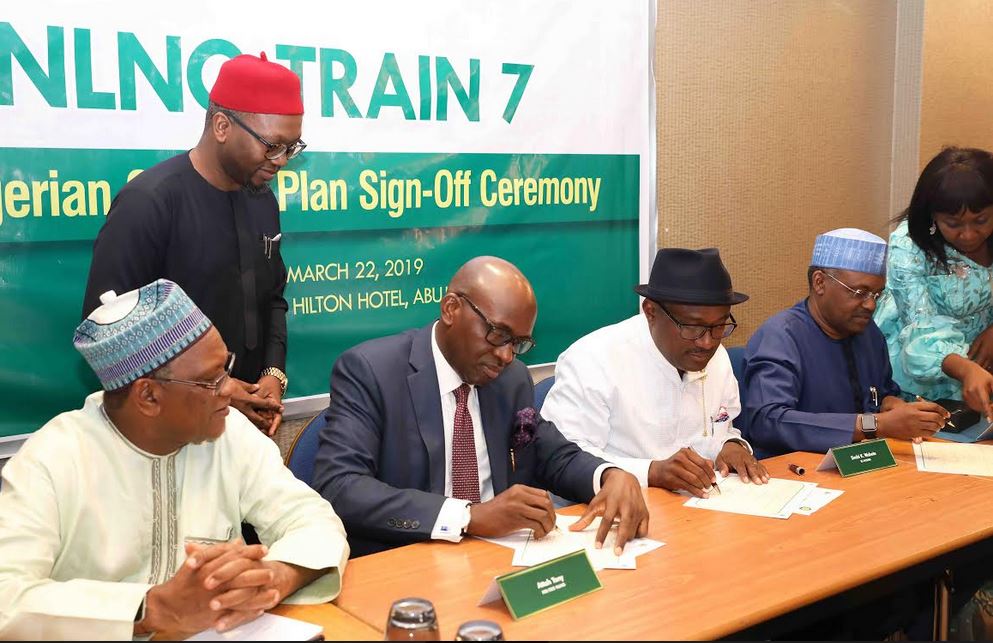 The Nigeria Liquefied Natural Gas Limited (NLNG), and Nigerian Content Development Monitoring Board (NCDMB), have signed off the approved plan for Nigeria Content (NC), for NLNG’s Train 7 project which will ensure the delivery of value and benefits to the Nigerian economy.

In his remarks to commemorate the milestone in Abuja, Attah said: “The NC Plan being signed today has made clear and robust provisions to deepen Nigerian Content in line with the Nigerian Oil and Gas Industry Content Development (NOGICD) Act, significantly higher than what was achieved in the previous NLNG projects.

“In order to adapt this spirit of continuous improvement, NCDMB and NLNG are fully aligned to collaborate during the operationalisation of the plan.  This synergy will ensure that value added opportunities for Nigeria are indeed maximised and the Train 7 project is delivered to meet international standards of quality and safety.”

He added that the NLNG was underpinned by its vision of being ‘a global LNG company helping to build a better Nigeria’, stating that  playing globally is about the business itself and helping to build a better Nigeria is consistent with NLNG’s partnership with NCDMB. He noted that the partnership has been very effective through a Business to Business Service Level Agreement, SLA, with NCDMB signed in June 2017, the first of its kind in the industry.

He remarked that the economic impact of increased LNG production will be significant, stating that since the start of its operations 20 years ago, the NLNG has generated more than $100 billion in revenue and has paid over $16 billion in dividend to the federal government of Nigeria through the Nigeria National Petroleum Corporation with 49 per cent shareholding in the company.

In addition, NLNG has paid over $13 billion to the federal government for feed gas purchases and $6.5 billion in taxes. He said that the numbers will be greater with the envisaged 35 per cent increase in NLNG’s production, which he said will boost the country’s GDP significantly.

Speaking further on the benefits of the project to the Nigerian economy, Attah stated that the project will create over 10, 000 jobs at construction stage and will stimulate capacity building of local industries along the LNG value chain.

He stated that NLNG has a sterling track record of developing local capacity, citing the recent BGT Plus Project where a subsidiary of NLNG, Bonny Gas Transport (BGT), procured six new vessels to renew its fleet. He said the benefitting indigenous companies, some of whom were exporting their products for the very first time, earned revenues in excess of $10 million and international reputation as exporting companies.

Wabote, in his remarks said the expected job explosion from Train 7 is banked on the Nigerian Content Plan, which provides for 100 percent engineering of all non-cryogenic areas in-country.

He added that the total in-country engineering man hours is set at 55 percent, which exceeds the minimum level stipulated in the NOGICD Act, in line with the Board’s resolve to push beyond the boundary of limitations, he added.

Wabote pointed out that the increased number of NLNG Trains would also provide huge business opportunities for local businesses to build capabilities in the maintenance of LNG plants, especially in the area of cryogenics. He remarked that the project would also catalyze other upstream gas supply projects required to keep the LNG train busy and make stranded gas fields in the shallow and deep offshore in the area economical.

The Train 7 project is expected to ramp up NLNG’s production capacity by 35 per cent from 22 million tonnes per annum, MTPA, to 30 MTPA.