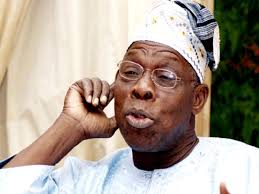 Former President Olusegun Obasanjo gives details of how President Buhari whom he said has taken Nigeria back to Abacha, plan to rig elections.

In a statement entitled “POINTS FOR CONCERN AND ACTION”, Obasanjo also reveals the role of Amina Zakari, national commissioner of the Independent National Electoral Commission, in the plan to rig election.

I am concerned as a democrat who believes that with faithful and diligent practice of democracy, we can get over most of our political problems and move steadfastly and surefootedly on the course of stability, unity of purpose, socio-economic growth and progress for all.

Democracy becomes a sham if elections are carried out by people who should be impartial and neutral umpires, but who show no integrity, acting with blatant partiality, duplicity and imbecility. For all democrats and those carrying out the process of elections, there must be the redline that must not be crossed in tactics and practices of democracy.

I personally have serious doubt about the present INEC’s integrity, impartiality and competence to conduct a fair, free and credible election. And if the INEC is willing, will the ruling party and government allow it? From what we saw and knew about Osun State gubernatorial election, what was conclusive was declared inconclusive despite all advice to the contrary. The unnecessary rerun, if viewed as a test-run for a larger general election, would lead people to expect incidences of deliberately contrived, broken or non-working voting machines or card readers, confusion of voters as to their voting stations, inadequate supply of voting materials to designated places, long line to discourage voters and turning blind eyes to favour the blue-eye political party of INEC because the Commission’s hands will be tied to enable hatchet men and women to perform their unwholesome assignment. The transmission and collation of results are subject to interference, manipulation and meddling. If the INEC’s favourite political party wins with all the above infractions, the result will be conclusively declared and if not, there will be a ‘rerun’, the result of which is known before it is carried out. I know that I am not alone in being sceptical about the integrity of INEC and its ability to act creditably and above board. But we are open to be convinced otherwise.

The joke about INEC would seem real. The INEC was asked if the Commission was ready for the election and if it expects the election to be free, fair and credible. The INEC man is reported as saying in response, “we are ready with everything including the results!” God save Nigeria! It is up to Nigerians to ensure that the redline is not crossed in safeguarding our fledgling democracy. And if crossed, appropriate action must be taken not to allow our democracy to be derailed.

A friend of mine who is more credulous and who claims to be close to the Chair of INEC keeps telling me that INEC will retrieve its image and reputation by conducting the coming elections with utmost integrity and impartiality. I am not sure as I believe more in action than in words and in past record than in promise. The track record of the present INEC is fairly sordid and all men and women of goodwill and believers in democracy must be prepared for the worst from INEC and their encouragers and how to get Nigeria out of the electoral morass that the Commission is driving us into. To be forewarned is to be forearmed. A battle long forewarned does not embroil the cripple nor catch him unawares. A word is sufficient for the wise. The labour of Nigerian democracy heroes must not be in vain. Some men of God would hold President Buhari to his word on free, fair, credible and peaceful elections. I am a realist and I reiterate that I go by track record. Therefore, I am not persuaded by a track record of hollow words, impunity, insensitivity and ‘I-couldn’t-care-less’ attitude, or by the sanctimonious claims of any candidate and his campaign staff. I will only believe what I see. This is a time for vigilance to fight to safeguard our votes and defend our democracy. The price of liberty and sustenance of our democracy is eternal vigilance and appropriate reaction to ward off iniquities. We must all be ready to pay that price and not relying on hollow words of callousness. The derailment of Nigerian democracy will be a monumental disaster comparable to the disaster of the Nigerian first military coup.

While Nigerians must not allow such a disaster to happen nor take such an affront lying low, the international community who played an admirable role in warning INEC, of course, to no avail on the Osun State gubernatorial election and who have been warning all political parties must on this occasion give more serious warning, send more people to the field to observe and work out punitive measures against INEC and security officials especially the Police and politicians who stand to gain from INEC’s misconduct, which is obviously encouraged by the Executive Arm of Government and who must be held responsible for the violence that will follow. Such measures can vary from denial and withdrawal of visas from the people concerned and from their families to other more stringent measures including their accounts being frozen and taking them to International Criminal Court, ICC, if violence emanates from their action or inaction. Nigeria must not be allowed to slip off the democratic path nor go into anarchy and ruin. No individual nor group has monopoly of violence or gangsterism. And we must not forget that in human interaction, reactions are normally greater than action, though opposite.

It is no use, at this juncture, to keep lamenting about the failure, incompetence, divisiveness, nepotism, encouragement and condonation of corruption by Buhari administration as there is neither redeeming feature nor personality to salvage the situation within that hierarchy. You cannot give what you don’t have. Bode George put it bluntly in his statement of December 3, 2018 when he said:

“The other day, the Vice-President of Nigeria, Professor Yemi Osinbajo – a learned man, an enlightened person in all parameters – was seen at various markets in Lagos State and Abuja distributing N10,000 each to market women. What an absurdity! It was indeed an obscene display of executive recklessness and abuse of office. Pray, where did the money come from? Was it budgeted for in the appropriation law? In more civilised nations, Osinbajo would have been impeached and prosecuted for gutting our collective treasury.”