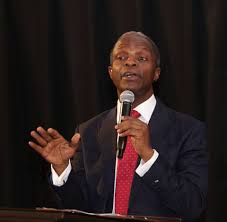 Vice President Yemi Osinbajo has called for enhanced synergy and strategic security policy between Nigeria and neighbouring countries in the war against terrorism and violent extremism in Nigeria and her neighbours.

Osinbajo made the call at the Foreign Policy and National Security Conference with the theme, “Securing Nigeria’s Strategic Neighbourhood” organised by the National Defence College on Tuesday in Abuja.

He said that Nigeria’s international obligations could be perceived to range from bilateral commitments with its immediate neighbours and the fellow member states of the Economic Community of West African States to the continent as a whole.

Osinbajo, who was represented by his Special Assistant on Policy and Research, Mr Chris Ngwodo, said those commitments underpinned a foreign policy that was typically described as “Afrocentric.”

He said, “About three decades ago, the task of defining Nigeria’s strategic neighbourhood was a relatively easy one.

“We had in view our neighbours with whom we share contiguous borders, then West Africa and then Africa.

“Nigeria tends to view the ECOWAS region as its neighbourhood but has also retained strong relations with its immediate neighbours.

“We would perceive threats to national security through the lens of proximity as well as risks latent in the near abroad such as the Sahel and the Gulf of Guinea,” he said.

Osinbajo said that there was a clear link between transborder organised crime and various species of local gangsterism.

He added that human trafficking rings were driving irregular migration while the proliferation of Small Arms and Light Weapons continues to fuel conflicts on Nigeria shores.

“In Nigeria, what began as a local insurrection in the North-East has since metamorphosed into an insurgency troubling three other countries of Chad, Niger and Cameroon,” he said.

The Minister of Defence, Maj.-Gen. Bashir Magashi (retired), said the theme of the conference was timely in view of the real, imagined and emerging security realities confronting Nigeria.