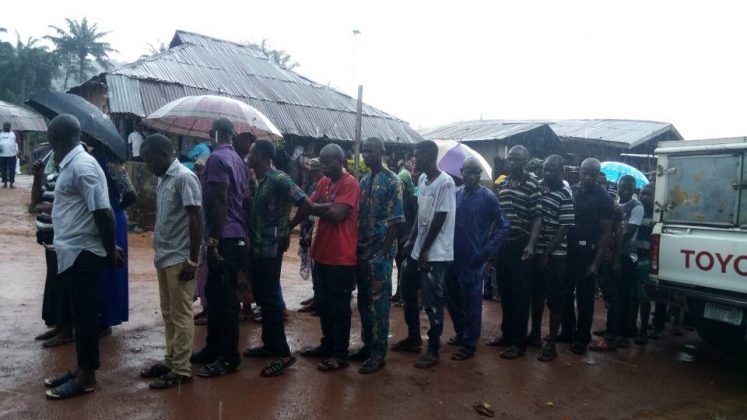 Some voters in Osogbo participating in the Osun governorship re-run election refused to quit the queue on Thursday morning in spite of a heavy downpour.
The voters were on the queue at Polling Unit 17, Ward 5, Adewale Street, Alekuwodo in the capital of the state.
The News Agency of Nigeria (NAN) reports that the election process started at 8 a.m. on Thursday but at around 9:12 a.m., there was heavy downpour which halted the process.
The sudden rainfall had everybody running for cover but voters already on the voting queue, who initially ran for cover, quickly returned when they noticed that others who refused to take cover had moved forward to replace them.
By the time the rain subsided, all the voters on the queue were already drenched.
The voting, however, continued at 9:30 a.m. when everyone (INEC staff, security, media men and others) had returned to their posts.
Earlier, some middle-aged men and an elderly woman who came with Permanent Voter Cards from another unit, had attempted to cast their votes but were disallowed by vigilant security and party agents.
At Garage-Olode in Ife South Local Government Area of Osun, voters also defied the rain to participate in the exercise.
Adereti Polling Unit 012 in Olode, Ife South Local Government Area has 812 registered voters while Alutu Erin Primary School Polling Unit 010 in Osi in the same council area has 502.
There are also 353 registered voters in Alapata Polling Unit 002 in Oyere II, Ife North Local Government Area.
Voters at the Adereti Polling Unit 012 had arrived as early as 7 am to check their names on the voters’ register while voting and accreditation commenced at 8.am.
At the Ward 5, Unit 17 Polling Unit on Adewale Street at Alekuwodo, Osogbo, accreditation and voting commenced at exactly 8 am under a downpour.
INEC officials had set up their tents and cubicles as early as 7 am while many of the voters had arrived for the exercise as early as 6.30am.
In Orolu, however, suspected thugs were said to have prevented some voters from reaching the three polling units in the council area although policemen were later drafted in to restore normalcy.
Meanwhile, the Resident Electoral Commissioner in the state, Mr Olusegun Agbaje, has assured the electorate of adequate security.
Agbaje gave the assurance when he visited the polling unit at Ward 5, Unit 17 on Adewale Street, Alekuwodo, Osogbo.
He said INEC and its ad-hoc staff were well prepared to conduct the election, adding that deployment of many security agents was assuring.
“INEC staff and ad-hoc staff are prepared for the election and we have heavy security presence which guarantees the safety of everyone.
“Anybody coming to snatch ballot boxes is putting his or life in danger.
“Party agents should compose themselves while the electorate should remain peaceful,” he said
Agbaje urged members of the National Youth Service Corps serving at the polling unit to critically examine the voter card before allowing anyone to vote.
He said the election would close at 2pm because of the limited units and voters, adding that he was optimistic of a successful outcome.
Also speaking, Mr Emmanuel Attah, the State Coordinator of NYSC in Osun, said INEC had assured him of the safety of corps members participating in the re-run election.
“I came to check how my children (corps members) are doing and know if they are properly taken care of and secured.
“I am happy about how the whole election process is going and I wish the parties involved the best of luck.
“NYSC is apolitical and the corps members serving as INEC ad-hoc staff here are doing their duties without favour to any party,” he said.
Prof. Joseph Fuwape, the Chief Returning Officer for the Osun governorship election, had described Saturday’s governorship election as inconclusive.
Fuwape, who is the Vice Chancellor of the Federal University of Technology, Akure (FUTA), while announcing the results, said Sen. Ademola Adeleke, the candidate of Peoples Democratic Party (PDP) scored 254,698 votes.
He said Alhaji Gboyega Oyetola, the candidate of All Progressives Congress (APC) scored 254, 345 votes.
Fuwape said the election was declared inconclusive because of cases of ballot boxes snatching in some polling units during the election.
He cited the affected polling units to include Ife North (one polling unit), Ife South (two polling units), Orolu (three polling units) and Osogbo (one polling unit).
NAN correspondents monitoring the election across the affected polling units reported a peaceful exercise amidst tight security.