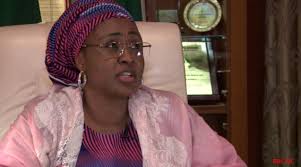 The Peoples Democratic Party (PDP) has asked President Muhammadu Buhari to probe his wife, Aisha, over the N2.5 billion scandal.
THEWILL recalls that Sani Baban-Inna, aide de camp (ADC) to the president’s wife, has been accused of using her name to collect money from unsuspecting associates and government officials.
However, the PDP in a statement by Kola Ologbondiyan, its spokesman, said the scandal has vindicated the stand of the opposition party that Buhari “presides over a government of corruption”.
Ologbondiyan said the ADC should be tried in an open court and be allowed to defend himself.
“PDP challenges President Muhammadu Buhari to show his zero tolerance for corruption by allowing for an open inquest into the N2.5 billion scandal, in which the first lady, Aisha Buhari, has already been entangled; instead of the spirited effort by the presidency to suppress a matter that is already in public domain,” the statement read.
“It is instructive to note that the first lady has already admitted that her detained security aide defrauded ‘unsuspecting associates and officials’, a position which inadvertently exposes the attempt by the Police to conceal the matter.
“The PDP and indeed Nigerians have always pointed to the very expensive lifestyle and personal effects, including posh jewelries, daily paraded by close relatives of Mr. President, thus belying gimmicks and stunts of the first family being saintly and pro-poor.
“Also, there have been allegations of acquisitions of sprawling and choice property in Nigeria and other countries by persons close to the president.
“Since the first lady, in her statement, confessed that her security aide defrauded ‘unsuspecting associates and officials’, the PDP demands that the aide be promptly docked in an open court and given the opportunity to defend himself and expose his accomplices in the alleged fraud.
“It is common knowledge that aides of former presidents and those of former first ladies are currently facing trial in open court over similar allegations and this should not be an exception.
“The PDP, however, hopes that the detained aide will not be ‘escorted’ out of the country to prevent him from opening up, as was the case of disgraced former minister of finance, Kemi Adeosun.
“Moreover, the PDP invites Nigerians to note that the presidency has suddenly gone dumb on a N2.5 billion fraud under its roof. Does this not amount to admittance of complicity by the Buhari presidency, which is becoming notorious as a den of certificate forgers and persons of questionable character.
“The PDP therefore holds that since issues have been joined and high profile personalities in the presidency named, it hopes this matter will not be swept under the carpet.”