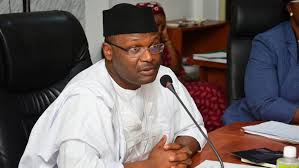 Reports rife in many social media platforms over the week-end said the president is planning to replace the chairman with Amina Zakary.

Those reports are utterly baseless and false. There is nothing like that, said the President’s Senior Special Assistant on Media and Publicity, Mallam Garba Shehu, saying there was no truth in such claims.

“Whoever is saying the President is removing INEC chairman is just displaying his illiteracy. Let him go and read the constitution.

“You need a resolution by two-thirds majority of the Senate for any such action,” Shehu said according to The Nation.

He said to fire the umpire in chief, the president would need a resolution by two-thirds majority of the Senate to do so.

International observers on Sunday raised concerns about the rumour, saying cooperation between all stakeholders is needed to ensure a free, fair and credible elections.

Some of the observers speaking with Per Second News at a gathering on Sunday afternoon at the residence of a foreign diplomat also raised concerns about “hostile and intimidating campaign rhetoric, limited space for substantive debate and diminished voters’ ability to make an informed choice.”