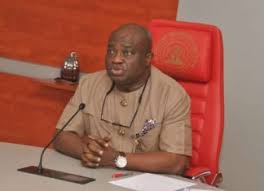 Governor Okezie Ikpeazu of Abia has expressed gratitude to God for averting bloodbath in the state, following the withdrawal of troops deployed to Abia for a one-month military exercise code-named “Operation Python Dance.”

Ikpeazu made the remark on Sunday when he visited the secretariat of the Nigeria Union of Journalists (NUJ) Abia council to commiserate with journalists over last Tuesday’s invasion of the secretariat by soldiers.

The governor noted that the presence of the troops sparked tension across the state.

He said “we are grateful to God for intervening in stopping what could have been the greatest bloodbath known in the history of mankind.”

He also thanked President Muhammadu Buhari for reposing confidence in Southeast Governors’ Forum, “by giving us a second chance to talk to our people on the need for us to live as one united nation.”

He added that the Igbos remained the most widely travelled people in Nigeria, living and conducting businesses in every nook and cranny of the country.

The governor put the estimated population of Igbos in the north at about 12 million, with Borno having the least population of about 50,000 Igbo households.

He said Abia needed peace for business to thrive, especially in Aba, the commercial nerve centre of the state.

“I am very happy to say that normalcy has returned to the state,” he said, adding that Muslims worshipped in their Mosque on Friday in Aba.

He, therefore, urged residents of the state to go about their lawful businesses, assuring them that government would continue to provide adequate security for lives and property.

The governor described the invasion of the NUJ secretariat as unwarranted, saying that “journalists do not deserve such an attack.”

He said that although journalists faced different hazards in the course of their duty, military attacks only happened under military regime or war situation and not in a democracy.

Ikpeazu, who complained that the activities of his administration were under-reported, urged journalists to help in reporting the state positively to the world.

He promised to look into some of the challenges facing the Abia NUJ, including taking steps to complete the union’s unfinished permanent secretariat.

Earlier, the state Chairman of the union, Mr John Emejor, narrated how the secretariat was invaded by no fewer than 20 soldiers without any provocation.

Emejor said that Abia NUJ was the only council in the country that still operated in rented apartment.

He described the relationship between the union and Ikpeazu’s administration as frosty and urged the governor to take steps to reverse the trend.

The Abia Correspondent of The Oracle Today newspaper, Bonny Okoro, was manhandled during the attack.

His Samsung tablet, as well as a cellphone belonging to the correspondent of Daily Times, Mr Sunny Nwakanma, was also destroyed by the assailants.