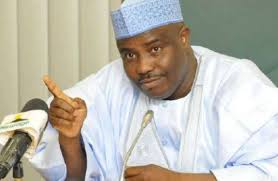 Governor of Sokoto state, Aminu Tambuwal, has called on Nigerians to reject what he described as “prison yard democracy”.

He made this known in a statement on Tuesday, as he spoke on the recent happenings in Benue state and Abuja, where security agencies reportedly meddled in the affairs of both the Benue state and federal legislators.

Tambuwal, a former Speaker of the House of Representatives, condemned the “ignoble meddlesomeness, rascality and high-handedness of some security agencies”.

He said the rights of the citizenry are “shackled to the caprices of a few, as if we now run a nation of helpless inmates”.

“If the people of Nigeria are so unfortunate to endure the growling nightmare occasioned by deprivation of most things that a democracy should ordinarily provide; if they are now accustomed to the pangs of hunger, unemployment, shabby infrastructure, poor healthcare and general hopelessness, they should, in the interest of democracy and the youths, stand against anything that has the potential of robbing them of their inalienable rights to live and make choices as free citizens,” he said.

“These are unfortunate incidents, an aberration, a reprehensible attack on the fundamental human rights and privileges of fellow Nigerians and a direct attack on our fledgling democracy.

“We should condemn this crass and impudent exhibition of uncivilized conduct, so that we can keep peace and maintain a civilized society.

“Democracy is about freedom, of choice and association. It is about the people and the supremacy of the will of the people. Democracy, loses its essential value when the overall interest of the people takes a back seat in any supposedly democratic setting.

“Legitimate political choices and movements, including cross-carpeting, are part of a democratic enterprise.

“Any attempt to bully people out of their legitimate, democratic choices is a war against democracy, the rights of the citizenry, that power this unique people-oriented system of governance.

“I also call on our leaders at all levels, to guard their utterances, in order not to drive our nation further down the path of divisiveness and ethnic/religious mistrust. Let us water our democracy, using the fountains of equity, fairness and justice for all.”