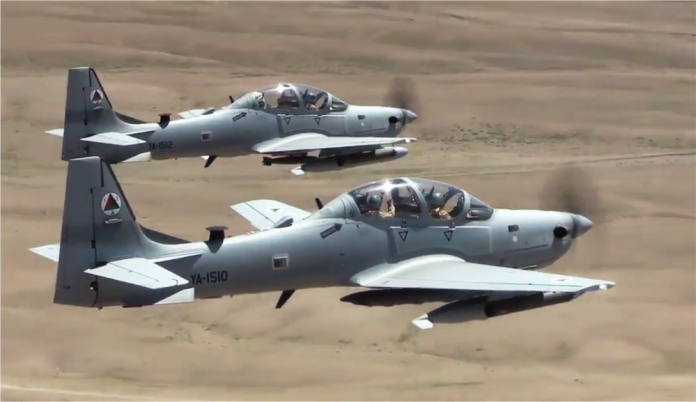 The Trump administration is greenlighting a nearly $600 million sale of high-tech attack planes to Nigeria, officials said Thursday. The goal is to shore up the West African nation’s ability to fight Boko Haram and other extremists, despite U.S. concerns about human rights abuses by Nigerian security forces.

The Associated Press reports that the sale will let Nigeria buy up to 12 Embraer A-29 Super Tucano aircraft from Colorado-based Sierra Nevada Corp., according to officials who were briefed on the matter but spoke on condition of anonymity because they were not authorized to discuss it publicly. The aircraft come with sophisticated targeting equipment that the U.S says will help Nigeria fight terrorism, trafficking, insurgency and illicit trade.

In his final days in office, former President Barack Obama put the planned sale on hold after a Nigerian fighter jet repeatedly bombed a camp near the Cameroon border housing civilians who had fled Boko Haram. Local officials have said more than 230 people were killed, in an incident that brought new attention to alleged abuses by Nigeria’s forces.

A few weeks later, newly inaugurated President Donald Trump told Nigerian President Muhammadu Buhari that he supported the sale. Trump told the Nigerian leader in their first phone call that it would increase American exports and help Nigeria fight terrorists, according to officials.

The move is Trump’s latest to arm countries despite questionable rights records in some cases. On his first trip abroad as president, Trump announced a $110 billion sale of military equipment to Saudi Arabia, including precision-guided munitions that Obama had cut off over concerns about high rates of civilian casualties in Yemen. Saudi Arabia is at war with Iranian-backed Shiite rebels in Yemen.

Despite approving the sale to Nigeria, the U.S. is keeping up the pressure on Buhari’s government to improve its forces’ human rights practices and ensure accountability for violators, a U.S. official said. The aim of the sale is to help Nigeria and its neighbors strengthen their ability to fight Boko Haram and an Islamic State group affiliate in West Africa. Other countries in the region fighting similar threats already have the Super Tucano, the official noted.

The State Department notified Congress late Wednesday of its plans to approve the sale. That triggered a 30-day review period in which lawmakers can try to block the sale. While several Democrats in particular have raised concerns, Congress is unlikely to stop the administration from proceeding.

John Campbell, a Nigeria scholar at the Council on Foreign Relations, said concerns have receded somewhat as Nigeria has taken steps to address shortcomings, including granting the International Committee of the Red Cross access to some Nigerian detention facilities.

“There are signs of some progress,” Campbell said. Still, he said Nigeria had a “long way to go.”

If the sale goes forward, the U.S. will have to send employees or contractors to Nigeria to provide logistical support and train teams on how to use the aircraft. They also would provide guidance on international laws for protecting civilians, officials said.

The Nigerian air force has been accused of bombing civilian targets several times in recent years. The State Department said in report last year that the Nigerian government has taken “few steps to investigate or prosecute officials who committed violations, whether in the security forces or elsewhere in the government, and impunity remained widespread at all levels of government.”

Amnesty International also has accused Nigeria’s military of war crimes and crimes against humanity in the extrajudicial killings of an estimated 8,000 Boko Haram suspects. Buhari promised to investigate the alleged abuses after he won office in March 2015. No soldier has since been prosecuted.

Nigeria is Africa’s largest consumer market, with 170 million people, and the continent’s second-largest oil producer. It is strategically located on the edge of the Sahel, the largely lawless semi-desert region bridging north and sub-Saharan Africa where experts warn of Islamic extremists expanding their reach. More than 20,000 have been killed and about 3 million displaced in Boko Haram’s insurgency since 2009, in which the extremist group has sought to enforce strict Islamic rule.